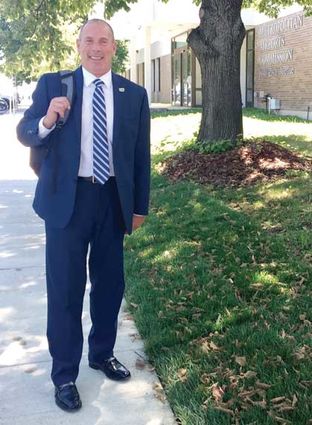 Brian Ryks, Metropolitan Airport Commission Executive Director/CEO heads out from MAC headquarters to a meeting, armed with a backpack of information, and possibly his workout attire as keeping fit is an important part of his plan for a well balanced life.

Brian Ryks thinks a lot about people. As Executive Director and CEO of the Metropolitan Airport Commission (MAC), thinking about people is an inherent part of the job. However, it's what Ryks thinks about people that proves him such an effective leader. He empowers people by believing in them, having reasonable expectations of them, and encouraging them to live well bal-anced lives, including time outside work.

Ryks is responsible for the administration and management of MAC's seven-airport system, which generates nearly $16 billion in total economic output, supporting up to 87,000 jobs in Minnesota. Prior to his appointment to MAC in May 2016, research about its formation made a positive impact on him, drawing Ryks towards the organization. MAC was created by the Minnesota Legislature in 1943 to promote efficient, safe, economical air commerce, and to develop the full potentials of aviation across the Minneapolis-St. Paul metropolitan area.

"When you reflect back on those 75 years," said Ryks, "and you think about the foresight the governor and legislature had to create an autonomous airport commission focused, not only on running the Minneapolis St. Paul International Airport, but taking on additional airports to promote aviation in our region and throughout the state, that is just fantastic foresight."

MAC now consists of Minneapolis/St. Paul International, St. Paul Downtown, Lake Elmo, Anoka County Blaine, Crystal, Flying Cloud, and Airlake airports. There are folks who would consider that level of responsibility paralysis inducing. However, having attained 33 years of experience in the field, what Ryks learned about people over that time is also what causes him to enjoy going to work every day.

His passion for aviation began as child, going to watch airplanes take off and land at MSP. He went on to earn a private pilot license and instrument rating at Airlake Airport. During college he served an internship under Tim Anderson at MSP, returning there for a $5 per hour part-time job in the Airport Director's office, and then on to noise abatement where he learned some of his most valuable lessons about the passion involved in aviation and in people.

"Coming out of school, being a pilot, and being really pro aviation, to pick up a phone and listen to someone complaining about noise or about aviation was really enlightening," said Ryks. "It was like being a mediator between the community, the FAA, and the airlines, trying to come up with solutions to mitigate the impact of noise on communities."

The part-time work developed into a full-time position in noise abatement where, as he gained more experience in mediating complicated situations, he set goals to move into airport management.

"From a relationship building standpoint, and all of those relationships were critical, it really taught me to build strong, working, trustworthy relationships between all parties in order to make progress," said Ryks, "I think it's continued communication, outreach, having frank, honest conversations, and doing what you say you're going to do.

"Also, at times, you have to face the fact that you are at a point where you just can't meet a specific need. That is when you have to maintain honesty and be able to, as they say, agree to disagree, but be able to walk away and not disrupt trust in the relationship you've established with that individual or that party."

Ryks continued to develop his ability to meet challenges head on, employing openness and honesty to build a foundation of trust between people, especially in challenging situations, a policy that built success for the airports for which he worked during his entire career.

Over time, and with purpose, he moved to different positions at a total of seven airports. In 1990, in order to become involved in construction in a new major hub airport, he took a Manager of Noise Abatement position at Denver International Airport. Then came the move to Aberdeen. Even though the financial rewards did not meet the level of his noise abatement role in Denver, he purposefully moved to South Dakota to gain experience in airport management.

"I consider Aberdeen almost my second internship because my background, up to that point, revolved around noise abatement," said Ryks. "So, even though I took a pay cut, my goal was to manage airports. In that position, we were able to accomplish some tremendous projects at Aberdeen."

After Aberdeen came St. Cloud Airport where, as a manager, Ryks obtained federal funds to completely redevelop its airfield. In Duluth, he oversaw building of a new, $80 million terminal, leveraging more federal dollars than had ever been leveraged at a terminal of that size.

"We did that project through 23 short-term FAA extensions of the aviation bill which made it just a tremendous challenge from a funding and construction standpoint," said Ryks.

From there, it was on to Grand Rapids, Michigan to run a small hub airport, engaging in innovative ways to expand air service and generate capital dollars from the community and area businesses to make improvements to the airport.

By the time the opportunity arose to become Executive Director and CEO of the Metropolitan Airports Commission, Ryks had become a seasoned veteran of airport management. As is his manner, meeting the people involved in MAC was the motivating factor in accepting the position.

"As I was applying for the position and doing the research, over and over I just found examples of performance that was at the top," said Ryks. "The finance department, leadership, the operations and maintenance departments, planning and development, safety and security, the reliever airport staff...the things they were doing were just leading the industry. That's where I got my confidence in taking this on; it's really built in the staff."

Upon meeting each department at MAC, comprised of over 600 employees, Ryks laid the foundation upon which his career had been built to that point, trusting in and empowering people.

"I believe when you surround yourself with people smarter than you, like we've done here with this leadership team, it allows the organization to really succeed," said Ryks. "It's about hiring individuals that oversee, in this case, numerous different departments. I consider them experts in their fields. I'm not the expert."

As a leader, he is clear in what builds and maintains trust, aspects of which he himself role models. While addressing MAC employees in their initial meeting he said, "Show up for work, be reliable, work hard and to the best of your ability. Be safe so you can go home and spend time with your family or whatever you like to do when you're done with work. I want you to enjoy that too, because the sole focus can't be on work. We have to have a balance."

Ryks' own balance consists of a 29-year marriage to Tracy, raising three children, Makenzie, Meghan, and Jaxyn, now in their twenties, implementing an exercise program to stay physically and mentally fit, and following a faith journey to guide him in all aspects of life, including the complexities of leadership at MAC.

"It's a big, very complex operation," said Ryks. "Something can happen like that (as he snaps his fingers) that really causes a disruption but, for me, it's about having people you can trust in key positions, people you know are on top of things, that, if an incident occurs, you feel they've got the capability to handle things, to make the right decision. Obviously, as the ultimate decision maker here, I need that kind of support."

It is the leadership and work of Ryks and his exceptional team that garnered recognition and awards for the Metropolitan Airport Commission in 2016 and 2017 from the Airports Council International who named MSP the Best Airport in North America in its size category, Skytrax for the Best Airport Staff in North America, and the Airport Transportation Research Society for the Most Efficiently Managed Airport in North America. As is his character, while Ryks accepts responsibility for the operations of MAC, he credits others with its success.

"I'm just humbled to be in this position and to have the staff and employees that are working here," said Ryks. "just so humbled, because these people are just outstanding. They are passionate. They make this organization excel."

In reality, it is the type of supportive leadership exemplified by Brian Ryks that allows people to be all they can be on an individual basis that creates success in any organization. Brian Ryks is a living example of that doctrine.

Ryks currently serves on the Airports Council International North America Board of Directors and is its representative to the World Governing Board, is Chairman of the ACI Audit Committee, and a member of the American Association of Airport Executives Policy Review Committee.

(STP) terminal including infrastructure to

support a new full-service restaurant and 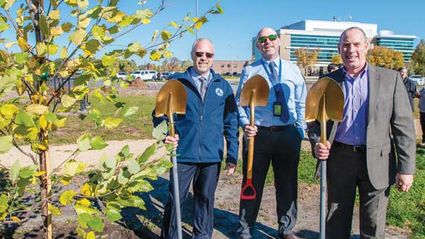 products at MIC and ANE

LVN, and FCM so all MAC reliever airports

now have attractive areas for community