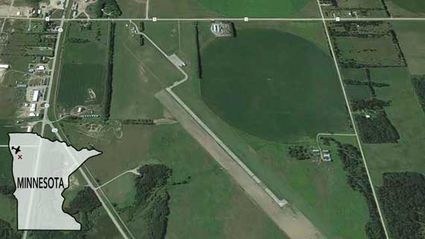 Photo courtesy of the city of Fertile

Aerial view of the landing strip at Fertile Municipal Airport.

It's not fertile in Fertile. Well, that's not exactly true. The surrounding area is probably the best farm land in North America, but the town is built on a geological anomaly called the "Sand Hills."

Back in prehistoric times, this was the bottom of a glacial lake called Agassiz. As the glaciers froze and melted, Lake Agassiz expanded and contracted. The Sand Hills were formed during one of those cycles as the granular soils were deposited along the edge of the glacier.

The Sand Hills might not be the best place for agriculture, but it's close to paradise for people who like the outdoors. Great kayaking and canoing can be found on the Sand Hill River, a tributary of the Red River of the North.

The Agassiz Environmental Learning Center is 640 acres of the best bird watching in North America. The Nature Center is open all year and has over 10 miles of well groomed trails for hiking and skiing. If you want to ruin a good walk, the Sand Hill Golf Course is one of the finest in the state. Bergeson Nursery, eight miles southeast of fertile, has some spectacular flower gardens which are open to the public during the summer.

Fertile's Veterans Memorial was built with volunteer labor and is a good place for quiet contemplation in the summer.

Sandy soil might not be the best for crops, but it's great for building airports. Fertile has one right next to town.

Originally, the airport belonged to the local flying club. It consisted of a runway on 100 acres of leased land. Some 40 years ago, the city began the process of making it a municipal airport, thus eligible for State and Federal funds. Ownership of the airport, along with the land lease, was transferred to the city and it became the Fertile Municipal Airport.

Land side facilities are a little spartan, but there's on-call public transportation available. Camping on the airport is available. Some good restaurants are less than a mile from the aircraft parking area, making Fertile the perfect destination for a $100 hamburger flight. When you're ready for the next leg, avgas is available at the self-service fueling station that was new in 2015.

So how did the town get the name? Fertile was settled in the 1880s primarily by people from a town in Iowa with the same name. Why they moved from Iowa to northern Minnesota is lost to history, but a higher percentage of Fertile residents claim Norwegian ancestry than in any other city.

Most likely the Norsemen found the heat in Iowa oppressive and the solid cold of northern Minnesota was more to their liking. Fertile has twice recorded temperatures of 46 degrees below zero.

Also, Fertile is located at the geographic center of North America (thats Rugby, N.D. a long way from Fertile). Being right in the middle of things is something Scandinavians would like.

Fertile hosts several annual events. (The annual Hoedown is a fundraiser sponsored by a local church. this year the theme was the Fabulous 50s.)

The big event is the Polk County Fair, held July each year. The fair is one of the largest and best equipped in northern Minnesota. Every year the grandstand features a rodeo. theres a "demolition derby" and Baja Racing.

The Memorial Free Stage showcases a variety of acts from magic to dancing and a variety of music. the fair has 4-H and FFA events, there's a petting zoo, Christian Fellowship Tent, exhibit buildings and enough to eat for even the local Norsemen. The midway features plenty of rides at amazingly reasonable prices. Fireworks and a parade are part of the celebration, and there's lots more.

If you like being outdoors and having the convenience of an airport close to all the action, Fertile Municipal Airport is where it's at.