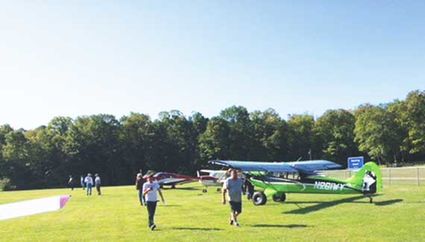 Most strips offered ample parking for aircraft enjoying the camaraderie at each stop. Sometimes, up to 20 aircraft were on the ground at one time.

A beautiful day and plentiful prizes resulted in a record turnout of 32 aircraft and 46 players, flying to four different grass strips, approximately 160 NM, before returning to Brainerd to play their hand. 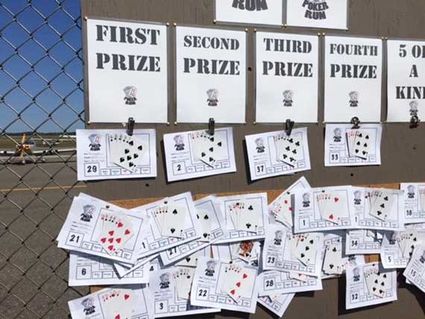 The leader board continued to change until all hands were in. This year the first prize winner had a winning ad featuring three queens.

Pilots were greeted at all stops with snacks. The Bowstring Flyers pulled out all the stops, greeting participants with home made sausage, egg and cheese biscuit sandwiches and home made caramel rolls. Needless to say, Bowstring was a very popular stop!

Aircraft and pilots from as far north as Greenbush and Thief River Falls, to the south in the Twin Cities, flew in for the fun in a variety of aircraft from Cubs, Cessnas, an RV, Comanche, and even a Piel Emeraude.

Thanks to generous donations from aviation related companies and local businesses, 64 prizes were awarded to the 46 participants. Everyone was a winner, some going home with two prizes.

A big thank you goes to all of the folks that were in each of the stops, greeting participants and handing out their playing cards.

Professional, heads up flying by all the pilots made it a fun and safe event. From the comments overheard, nearly all are planning to return for next year's Grass is a Gas!