Making the most of Aviation 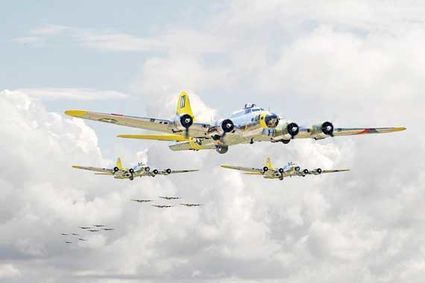 B-17s of the 486th Bomb Group in the colors they wore when Grace flew them.

Boxing Day is a uniquely British holiday. The day after Christmas, aristocrats present servants with gifts (in boxes) and working folks get the day off. During World War II, U.S. Army's Eighth Air Force was in Britain for over three years. Americans adapted to many local customs like darts and warm beer, but apparently not Boxing Day. In 1944 it was a working day for the "Mighty Eighth" when 151 bombers went to targets in Germany.

The B-17s of the 486th Bomb Group were flying that day. Near Koblenz, Germany, the group's lead plane was hit by anti-aircraft artillery. Two engines were damaged, as were the hydraulic and electrical systems. The crew managed to get their ship back to home base at Sudbury, but a crash landing was inevitable. Lucky for them their pilot had lots of experience with that form of returning to earth. This would be number 50 in a series of crash landings for Captain Richard (Dick) Grace, all but three done on purpose.

The crew walked away from the wreck with minor injuries. The captain had been wounded by a shell fragment, but he recovered to fly his next mission on January 10, 1945, his 47th birthday. Grace was more than twice the average age of his comrades and almost three times the age of the youngest. (There was a 16-year-old 8th Air Force gunner who flew six combat missions before his age was discovered.) Grace was the oldest pilot in the Air Force actively flying in combat.

Before the war, Dick Grace was a famous movie stunt pilot. There were no computer graphics in the 1920s or '30s. Spectacular scenes had to be staged and filmed, just like any other part of the show. Grace made himself an expert in performing dramatic airplane crashes. Handsome, charming, and not shy about publicity, he was the ideal Hollywood stunt pilot. Although he cultivated the daredevil image, Grace was not a reckless person. All his stunts were carefully planned and executed.

Grace was born in Morris, Minnesota. He attended high school in Mohall, North Dakota where one summer he sold hot dogs at the county fair. Fair attractions that year included demonstration flights by a Curtis Pusher Bi-plane. The teenager persuaded the pilot to take him on as a helper and they went touring together. Grace absorbed much aviation wisdom, but it was all theory. The airplane could only carry the pilot so there was no flight instruction. Near the end of the summer, a landing accident resulted in a damaged airplane and a broken leg for the aviator. It took longer for the leg to heal than to fix the aircraft, so Grace made his first flight solo while testing the repaired machine.

After high school, Grace moved to Minneapolis to attend the University of Minnesota. His father (also Richard) was a North Dakota Supreme Court Justice. Dick's plan was to follow him into a law career, but aviation was at war for the first time. Fliers were heroes.

When the United States declared war on Germany, Dick tried to enlist as an Army pilot. He was turned down as too young, so he went to the Navy recruiter and added a year to his age. He also recounted (maybe even embellished) his aviation experience and was accepted for flight training. His ground school started across town at the Dunwoody Institute. Flight training was in Pensacola, Florida.

When Ensign Grace arrived in France, he was assigned to a bombing squadron that flew De Haviland and Handley-Page aircraft. One of the targets he bombed in 1918 was the German Navy Base at Heligoland.

On temporary assignment with a pursuit squadron, he was shot down and injured while flying a S.P.A.D. That was Grace's first crash. Following his recovery, he was assigned to a flying boat squadron in Italy.

After the armistice, Grace left the Navy and tried being a student again. After flying in combat, that just wasn't going to work out for him.

Colby Dodge had commanded the Navy training program at Dunwoody when Grace was there with Clarence Hinck, another trainee. The three Navy Veterans formed Minneapolis based Federated Flyers. Scheduled air service was the plan but they were a little premature with that. Like many other aviation entrepreneurs of the period, their main business was barn storming.

While he was with Federated, Grace met another pilot who supposedly owned a company with a contract to do stunt work for the movie industry. Grace was getting bored with passenger hops, so he went to California. As it turned out, the other pilot wasn't as well connected as he made out. There was no contract, and no job. Stunt flying opportunities were another thing the pilot had exaggerated, so Grace went to work as a prop man with 20th Century Fox. It had nothing to do with propellers. He moved scenery, furniture, and other stuff around the sets.

Grace was doing props for a movie where a stunt man was supposed to jump out of a burning building into a net. The stunt man lost his nerve. Grace figured he could do it (he did) and started a short career doing conventional stunt work. He was hired by the famous cowboy actor Tom Mix, as a stunt double. When Mix found out Grace was a pilot, he had him do some flying for his movies. At first it was mostly somebody climbing from an airplane to a ground vehicle or from the vehicle to an airplane. Sometimes Grace did the flying, and sometimes he did the climbing.

One Tom Mix film, "Forest Ranger" included a scene where an airplane crashed into a barn. The first try at filming the scene was done with models, but Mix thought it didn't look very real. He asked Grace if it could be done with an actual airplane. Grace did it, but only after careful engineering. He had key parts of the barn built with balsa wood and the airplane structure weakened so the wings would sheer off and absorb the impact. Grace had suddenly become an expert at crashing airplanes and was much in demand.

In 1927 Grace was hired to do stunt flying for the movie, Wings. Aerial scenes were filmed with the help of the US. Army at Kelly Field in San Antonio, Texas. Grace got to know the Army pilots, including H.H. (Hap) Arnold.

When it became obvious the U.S. would enter World War II, Dick Grace wrote to Arnold (by then a general and chief of the Army Air Corps), volunteering his services as a combat pilot. He was offered a commission as a major and a job in supply. Grace wasn't interested in flying a desk. Eventually he was assigned to test P-39s and P-51s in Yuma, Arizona. When Grace accepted the Yuma assignment, he asked to be commissioned as a captain. He figured that a captain would have a better chance of eventually flying in combat than a major. After 11 months of flight testing, Grace got himself transferred to a unit ferrying aircraft to Europe. 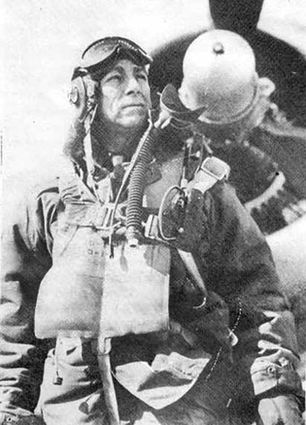 From WWII when Grace was with the 486 Bomb Group.

Another acquaintance was Jimmy Doolittle, then commander of the 8th Air Force. After flying a B-24 to England, Grace contacted Doolittle and asked for a combat assignment. He went to the 486th as a squadron operations officer and soon found himself bombing the Heligoland Naval Base for the second time, 26 years after the first. Shortly after the Boxing Day mission, he completed his tour in B-17s and was scheduled to go home. Not Dick Grace. He managed to get assigned to the 448th Bomb Group as assistant operations officer and flew B-24s until the war in Europe ended.

After VE Day, Grace returned to the US, was promoted to major, and finally took the desk job. He had flown 44 combat missions. His decorations from two World Wars included the Distinguished Flying Cross, six Air Medals, and four Purple Hearts.

Dick Grace finished his career managing an airline in South America. Not just a flyer, he authored four books, a screen play, and many magazine articles. He died in 1965 and was buried in Holy Cross Cemetery, Hollywood, California.