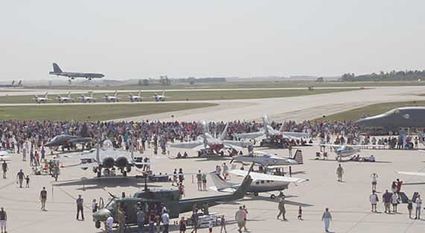 Life occasionally offers an opportunity to return to some significant place in time of the past, offering its mixed feelings somewhere between nostalgia and euphoria. It may be a class reunion and the meeting of old friends, or visiting the house and neighborhood you grew up in, or finding a resurrected model of that first car owned. For me recently, it was returning to the place where a 54 year aviation career essentially started.

At 78, I still have the capability and enjoy the privilege of flying. At 68, the 1950 Navion L-17, which I co-own, is a pleasure to fly. And at 58, the B-52H, which I flew 54 years ago, is still a very unique military airplane. These three oldies came together recently in a reunion of sorts.

The occasion in early August was Northern Neighbors Day, a Saturday open house celebration at Minot Air Force Base, North Dakota. The program promised a full day of aerial demonstrations, and static displays of military and civilian hardware featuring the B-52H bomber of the 5th Bomb Wing, one of the host tenants at Minot AFB. It was my assignment from Air Force pilot training in 1963, that first brought me to Minot and the 720th Bomb Squadron to fly the B-52H. We all know that the B-52 is old, but the amazing fact is that some of those same aircraft tail numbers I flew then, are still operational at Minot AFB today. During the open house I had the opportunity to again climb into an 'H', presenting nostalgia and euphoria at its finest.

On Friday the L-17 covered the 390nm from home base of Flying Cloud Airport to Minot International in less than 3 hours. It was a comfortable ride, a very typical experience in a Navion with its high lift wing and well harmonized controls. Early Saturday morning it was a 10 minute flight to the airbase and we arrived as directed before 0700, with authorization number to land at a government facility in hand. We made a 360 overhead approach to runway 30 and as I rolled out on final I was once again amazed at what a 13,200ft long by 300ft wide runway looks like in the windscreen. It offers plenty of room for error and indeed landing long was almost necessary as the first available taxiway was 9,000ft ahead!

After the 10 minute taxi we shut down on a ramp with other static displays, and hand towed the Navion the last 100 ft to its spot for the day, 60 feet in front of a B-52. There was a good assortment of military and civilian aircraft on static display, and for the next 8 hours an estimated 20,000 people of all ages would walk the ramp and enjoy being up close to the aircraft.

The day included flyovers by the B-52, the Stealth bomber, and the WWII B-25, plus other military aircraft and helicopters. On the civilian side there were a variety of aerobatics by the Carlton Glider, Sonex Mini Jet, T-33 Acemaker, Jim Pietz and his Bonanza, and the always kid friendly Kent Pietsch with his yellow Jelly Belly comedy routine. The afternoon was capped off with the Air Force Thunderbirds and their breathtaking, ground pounding, ear shattering maneuvers.

The mission of the B-52 has certainly changed from the 1960s cold war nuclear deterrent posture, with its constant airborne and ground alert, to the latest conventional smart weapon delivery of today. The part of the mission that has not changed is the B-52s capability to accurately deliver those weapons on relatively short notice to anywhere in the world. Plans now are to keep the B-52 operational into the 2040's extending the age of current models to 80 years, likely making it the oldest aircraft in Air Force history. 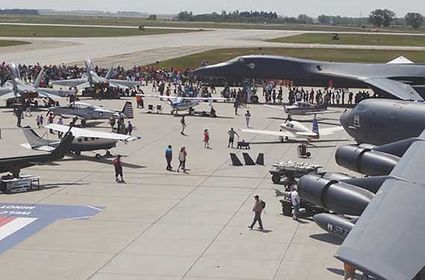 Some of the military and civilian aircraft on static display at Northern Neighbor's Day.

One of the highlights of the day was to walk around the B-52 and talk to the young crew members who fly it. I heard stories and comments that sounded familiar and brought me back to that earlier place in time of 58 years ago, stories and comments about military life, crew life, and family life. A satisfaction was noted that the human element remains basically the same while the plane has gone through its years of evolution in electronics and structure.

I was proud to have served at Minot AFB for those four and a half formative years. I learned and experienced much about heavy wing flying that would serve me well later in civilian life. A question remains in my mind, could I still fly a B-52, pull up behind a tanker, and take on 120,000 pounds of fuel? Pilot confidence says yes, of course, but reality would have me shyly chuckle at the very thought. In the meantime, I am proud to fly the L-17 Navion. At 78, it is still a thrill to push the power up for takeoff in a 68 year old aircraft, knowing that it will take you on yet another flying adventure.