Owner/Pilot Stephen Bohlig taxis his1953, T-34 A Mentor to the runway at Flying Cloud Airport to join the 15th Annual Air Tour. The T-34 was a military trainer used by the Marine Corps, Air Force, and the Navy from 1953 through 2015.

With so many wonderful things to be said about the annual Flying Cloud Air Tour it may be a challenge to know where to begin. However, at the top of the list are the organizational skills of coordinator Ben McQuillan. From news briefs prior to the event, to the safety meeting in advance of the day, to parking instructions at the airport, to last minute instructions before takeoff, everyone knows McQuillan is the go-to guy. That knowledge lends itself well to the order of the day.

Thirty aircraft took off from Flying Cloud Airport for the fifteenth annual Air Tour, flying to Starbuck Airport, then walked across the road for lunch at Water's Edge Restaurant, which was appropriately named as it was located on a gorgeous beach.

Participants flew a flour bag drop course over Buffalo Airport, a contest won by pilot Lance Fisher who actually calculated the winning run in his head before he ever got into his 1941 Porterfield Collegiate, an aircraft in which his mother had her check ride back in 1941.

Another aspect of delight with the Flying Cloud Air Tour are the many stories told, much to the interest and entertainment of all, which ultimately add to the camaraderie shared among members of the aviation community.

Being privileged with a ride in order to report the event is yet another blessing. It is easy to have confidence in pilot Stephen Bohlig, who recalls his interest in aviation burgeoning as a child, manifesting into flying glider, working up to becoming licensed to fly powered aircraft His first purchase was a Bonanza F33. His current is a 1953, T-34 A Mentor. Bohlig said this line of aircraft was a military trainer used by the Marine Corps, Air Force, and the Navy from 1953 through 2015. It was also the plane that carried the ecstatic Minnesota Flyer reporter on the Air Tour.

Being part of the aviation community means supporting one another, not only in the good times but in hard times, too, as exemplified by Bohlig who brought a Get Well card on the trip for pilot Chuck Cook, who is currently recovering in Hennepin County Medical Center from a serious airplane crash. Bohlig noted Cook has a Caring Bridge website upon which he encouraged fellow aviators to post supportive comments and receive updates about Cook's progress.

"I think the family would very much appreciate a note," said Bohlig. "It would be a nice gesture for the flying community to support Chuck, who has given so much of his time and effort to support general aviation."

Yet another blessing of the day was returning to Starbuck Airport after lunch to find homemade desserts in the A&D building, generously offered by Don and Donna Lilienthal and other members of the Pope County Flyers. 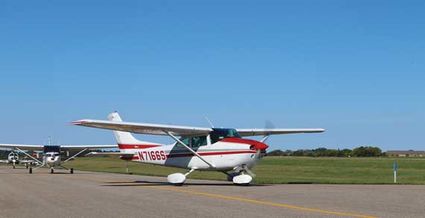 A 1976 Cessna 182P taxiing for takeoff position during the Annual Flying Cloud Air Tour headed, once again, by the most capable Ben McQuillan.

"It's been a great day!" said organizer extraordinaire, Ben McQuillan. "The folks at Starbuck did everything for us. The runway was perfect. The parking area was perfect, and huge. I can see why everyone comes up here to camp. The beach across the road is outstanding. Everybody loved the restaurant. It's an easy place to stop in."

It's been said that prior planning prevents poor performance. McQuillan is a role model for that statement.

"We wound up with 30 airplanes on departure," said McQuillan. "We had 28 land at Starbuck Airport, one in Glenwood, and one at the seaplane beach. It was perfect. Another one. That makes 15."

With a growing number of aircraft joining the tour every year, organizing for next year begins as the last wheels touch the ground at the close of the event. As participants returned to Flying Cloud, Ben McQuillan could be seen on the field chatting with pilots...in all likelihood, beginning plans for next year's delight.

Special thanks to Steve Bohlig for an enchanting ride.