Joseph Schlosser from Rockford camped under his Piper. Schlosser was one of several pilots who took advantage of the under wing camping opportunity.

Thanks to Minnesota Flyer reader, Bob Heavirland for taking the time and effort to share photos and a few words about his experience attending the Milaca Municipal Airport's 50th Annual Fly-In/Camp-In August 5.

Attendees were welcomed to bring a dish to share in Saturday evening's pot luck dinner. Rounding out the evening was the Milaca American Legion performing the Flag Retirement Ceremony. Under wing camping, picnic tables, and a grill were available to visitors. The American Legion also served pancakes, sausage, ham, eggs and fruit for a delicious breakfast Sunday morning. 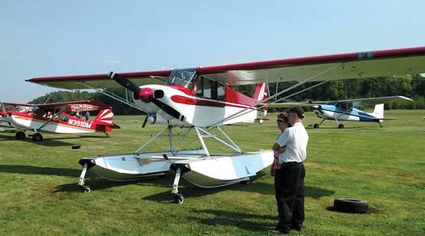 A very nice SuperCub on amphibious floats was a popular display.

Heavirland noted that nearly 50 aircraft flew in for the event, one of which was a custom built Cessna 170B flown by the legendary South African Stunt Pilot, Pyrotechnician, and Advanced Flight Training Instructor, Milne "CC" Pocock who demonstrated his short field technique landing and take offs in under 330 feet on the manicured runway.

Heavirland sent the Minnesota Flyer a sampling of photos of the nearly 50 aircraft that flew into the event.

Bob Heavirland writes: After waiting out the fog and low ceilings the aircraft started arriving about 9:30 to one of the best grass strips in the state. Some flew in and camped under the wing of their aircraft on Saturday night to get a head start on the great breakfast Milaca is known to serve.