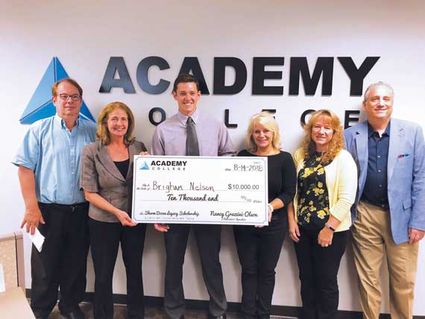 Meet Brigham Nelson: Brigham Nelson was born and raised in River Falls, Wisconsin. He was inspired by aviation at a young age because of his interest in remote control airplanes.

In the beginning, he struggled with take-offs and landings, but with time, he acquired proficiency with four-channel controls and was able to perform loops and barrel rolls.

After graduating from River Falls, WI High School, Brigham wondered if his love for flying remote control airplanes could transition to flying real airplanes as a career.

In 2014, Brigham walked into Academy College and his dream became a reality. He enrolled in the four-year Commercial Pilot Program and never looked back.

Brigham has completed his Commercial Pilot Certification and will be starting Multi-Engine and Flight Instructor courses this fall. He has the support of his parents and fiancée. Brigham's goal is to become a commercial airline pilot and give back to the community by teaching young kids about aviation and of course, flying remote control airplanes.