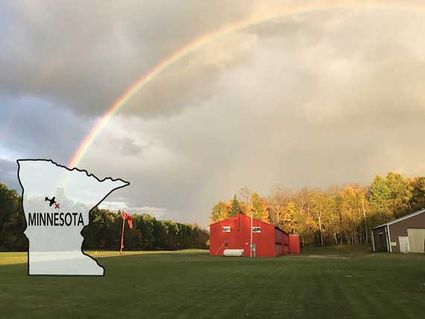 A rainbow shining brightly over the Arrival/Departure Building at Bowstring Municipal Airport.

By some standards, there's not much to Bowstring. It's officially an "unincorporated" place, meaning there's an identifiable community, but without a formal city charter. The population is about 120 people. The nearest level of organized government is Bowstring Township (population 242). This is all in Itasca County. There's also a Bowstring Lake, Bowstring River, and Bowstring State Forest.

Using a better set of standards, Bowstring is paradise. There are woods, lakes, and streams. The area has some terrific resorts. There's even golf if you want to ruin a good walk. If you like being outdoors, this is where it's at. Best of all, you don't have to spend hours in the car to enjoy all this.

Flying to the Bowstring/Itasca County Airport is possible all year round. Since 1901, there's been a store in Bowstring, which also serves as the local post office. The store reputedly had the last pay phone in the universe. Conversely, the Airport has a cell phone at the Arrival/Departure Building for emergency use. It's a testimony to the faith the people of Bowstring place in the honesty of aviators.

In 1961 a church was built in Bowstring, which was also the same year the airport opened. Local folks raised money for the church. It was built with lumber cut, sawed, and planed by local volunteers.

The airport was established by the same kind of initiative. Earl Schule was an Army private in World War I. He proved his sales abilities by successfully selling motorcycles at the height of the Great Depression. He was an inventor and a man with a vision who owned Schule's Camp, Bowstring Resort.

Realizing access to the aviation system would be good for the resort business, he donated the property needed, got things organized and persuaded the county to do the necessary clearing. After assuring all the state and federal requirements were met, he personally removed the closing crosses from the runway and officially opened the Earl Schule/Bowstring Airport for business. Earl lived in a yellow house on the west end of the runway, and watched his dream prosper for the next 39 years.

The 2,500-foot-long turf runway is the best part of the Bowstring Airport. In fact, there's no pavement. Taxiways, parking area, and tie-downs are all grass. Besides the cell phone, the A/D also has cooking facilities to go with the usual features. Camping is encouraged at the airport. Everything is open all year, so you hardy souls can camp there in January and use the A/D building to thaw yourselves out and make a hot meal. If you don't like roughing it, there's one resort within walking distance of the aircraft parking area. There are also other places to stay that will pick you up at the airport.

Bowstring Airport is kind of like the fictional Scottish village of Brigadoon in the Broadway Musical. Only the magic at Bowstring happens every year instead of every 100 years like at Brigadoon. Bowstring is home to five aircraft, but on the last weekend of September the airport is transformed into a very busy place. That's when the Fly-in, Drive-in, Camp-out happens, often attracting 50 or more airplanes. This isn't your usual Saturday morning event. There's three days of food, camp fires and fun. Just to be sure it happens; the alternate dates are the first weekend in October. It's all timed to coincide with the area's spectacular display of fall colors. It's been going on since 1998 and morphed into a weekend event around 2010.

The Brigadoon analogy might not be exactly accurate. Bowstring airport is owned by Itasca County, but operated by a volunteer airport board. Commission meetings are on the second Saturday of the month at 11:00 a.m. From noon until 2:00, the commissioners host a fly-in lunch. The monthly one is not quite as magical as the fall gathering, but it's a good chance to see Bowstring during the other seasons of the year. One of the airport commissioners described the Airport as, "the best kept secret in the county." He should have said in Minnesota, or maybe even in North America. 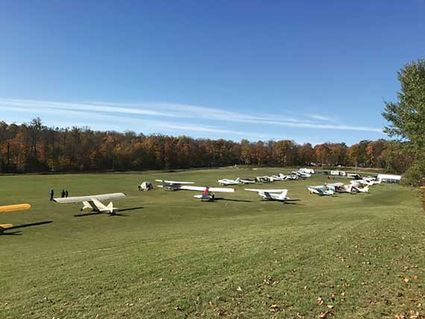 Aircraft in the parking area during the 2017 Fly-In.

If you want to go to aviator's paradise without dying, put 9Y0 in your GPS and head for Bowstring. If you're still flying with stuff from the twentieth century its 321 degrees and 28.3 Nautical Miles from the Grand Rapids VOR.