Wings of the North AirExpo 2018 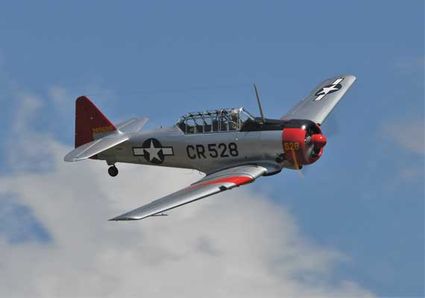 "When the opportunity to partner with Northland Aerospace, Wings of the North, and Pathfinder (a section of the Boy Scouts planning adventures, trips, service, and projects) to do a DRONE TECH event, we couldn't pass it up," said McDonald. "It offers STEM programing to our participants to help broaden their education, show them opportunities, and have fun working with drones. We're lucky to have the folks from Northland who are very familiar with, trained in, and licensed for unmanned asset flying."

With safety being the highest priority to all parties involved, Northland Aerospace arranged for drones to be flown inside netting they hung in the hangar adjacent to the WOTN Air Museum on the hill at Flying Cloud Airport.

The air show, announced by aviation historian and professional Emcee, Tom Lymburn, took place above the education tent, vendors, and static aircraft displays on the airport grounds, well away from the museum.

Among attendees during the two-day AirExpo event was Mitch Osowski, owner of Tin Tail Numbers and an aspiring pilot, who got a special bird's eye view of the air show. Osowski had the privilege to passenger behind pilot Chuck Cook in Cook's T-28 Trojan as he shared the sky with Stephen Bohlig in a T-34, Walt Fricke in a T-34, and Jim Skogen in a T-34.

"It was an experience of a lifetime," said Osowski. "It was quite amazing to see the skilled pilots all move together as one. They use hand signals to communicate and would change formation on a dime. Even "smoke ON" was synchronized. It was impressive and an honor to be part of it. "

On the ground among the vendors was Civil Air Patrol Sergeant Ben Haddley, originally from the United Kingdom but currently living in the Lake Minnetonka area. Haddley joined the Civil Air Patrol to further his future plans. 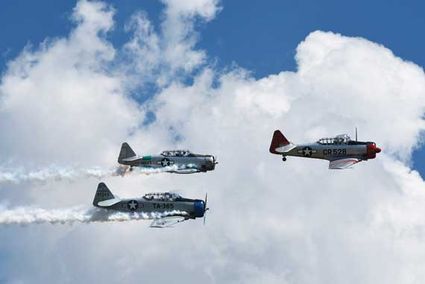 Three T-6/SNJs kept attendees' necks crained and eyes on the sky at the WOTN AirExpo.

"I joined CAP because I want to be part of the military and eventually join the SAS back in the UK," said Haddley. "The SAS is a higher branch of the Royal Air Force. They are like your special forces guys here. I'd absolutely love to join them. In the meantime, I am making the difference I can where I am right now."

Among visitors of the AirExpo was Kamille Wells, a fifth-grade teacher at Whittier Elementary School in Minneapolis, who was attending the event with her mother, nieces and nephews.

"It is my nephew Kaden, who just turned 15, it's his birthday gift. He wants to be a pilot in the Air Force."

Sunny, warm weather mixed with outstanding aircraft performances, military Veterans with whom to speak, drones to fly, food vendors providing delicious treats, and all kinds of people who just love aviation made attendance at the WOTN AirExpo a highly pleasurable experience for all.