A pilot on the move 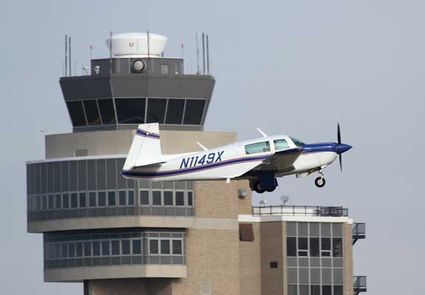 Mitchell Gossman does an MSP tower fly-by in his 1981 Mooney M20J in which he completed the MnDOT Passport Program, flying to all the airports in Minnesota.

Why would a pilot want to fly to all 135 of Minnesota's airports? Lots of reasons. Consider adding the "Fly Minnesota!" program to your list. After you land at 130 out of 135 airports and participate in museum and seminar activities, you will:

• Receive a cap, flight bag, and leather jacket, all with a patch with the program logo. You will enjoy explaining what the logo means when you are asked.

• When someone asks, "Have you been to the airport in..." you may interrupt and say, "YES!"

• Patronize some of the finest business owners in the state: restaurant and FBO owners.

• Have fun in the effort.

• Bask in the glory!

What will get you started on this journey?

For me, it started years ago by an aviation article challenging the reader to land at every airport in your State. It wasn't because I needed something new to do with an airplane – but what a great "something to do"! I whittled away slowly on the list.

One day I saw one of those maroon and gold passports at the FBO in Little Falls. That's appropriate, the boyhood home of Charles Lindbergh, who also had a quest. Almost simultaneously a friend said he was starting out, too. That did it. It lit the fire. I will do it, just as Lindbergh decided when he heard about the Orteig Prize.

All right, it's not flying by dead reckoning across the icy North Atlantic. However, it is still adventure and is relatively simple and safe. Just add two ingredients to your skills: time and money!

What was my favorite airport?

I've always liked St. Paul Downtown. There's nothing like being lined up on runway 32, especially at night, enjoying the runway lights; Downtown St. Paul with the historic, First Bank "1" light flashing like an airway beacon on the left, an actual historical airway beacon on Dayton's Bluff to the right, and the Mississippi below as you depart. See: http://mvgossman.com/STP

Definitely taking a Minnesota icon, Jason Davis of KSTP-TV, up for his last episode of On the Road.

Minnesota is my State. It's my home, by chance of birth. What is inherently great about flying Minnesota? For one thing, it's big, bigger than you think. It's bigger than New York or Utah, about the same size as all of the United Kingdom. Minnesota is bigger than half of California.

It contains the source of the Mississippi. About half its vertical descent to the Gulf of Mexico takes place in Minnesota. Have you followed it from the Headwaters at Itasca to where it continues to Iowa, south of La Crosse?

We have the 49th Parallel and an international border with Canada. See it when you land at Piney Pinecreek Airport. "Minnesota is flat," you say? Not at all. We have the drumlins and moraines left by the glaciers, the mountains of the Arrowhead (after all, it is Eagle Mountain, the highest point in the state), and the driftless area and bluffs of the southeast. Consider as you fly a mile above ground that you would be under the prior surface of that glacier.

The prairies of the south and southwest are of great economic importance and interest, with the railroads connecting the small towns serving farmers and townspeople, studded by water towers and grain elevators as if they were soldiers guarding the breadbasket of America and the world.

Countless other things await you that may have special meaning. See Rushford on a summer day and enjoy the view from the hill upon which it sits, as well as the perfume of wildflowers.

Land in Wisconsin for the Fly Minnesota Passport stamp at Red Wing's airport in Wisconsin, while enjoying the view of the confluence of the St. Croix and Mississippi. Northwest of Ortonville see the "other" Continental Divide where Red River flows north toward Hudson Bay and the Arctic Ocean, and the Minnesota River flows south toward the Gulf of Mexico.

Fly westbound along the peninsula between the Red Lakes. When you get to the end, just for fun, track course 005 for 39 nm and see the Minnesota-shaped forest.

There are thousands. Some highlights are Bemidji, Leech, Winnibigoshish, Cass, Red, Lake of the Woods, and the mammoth Mille Lacs. At the biggest freshwater lake in the world, Lake Superior, fly along the north shore, low and slow to enjoy the Minnesota shore as well as Isle Royale and the Apostle Islands in the distance.

Ask Minneapolis Approach for Class Bravo entry and enjoy a self-guided tour of downtown Minneapolis and St. Paul just outside of, and within, Class B.

As long as you are out there at the far reaches of the state for the airports (Hallock to the NW, Luverne to the SW, Caledonia to the SE, and Grand Marais/Cook County to the NE), why not check out the geographical boundaries of the state? I did... for instance, as long as I was landing at Hallock and seeing the extreme northwestern corner of the state, I thought I'd pay a visit to Pembina, the extreme northeastern airport of North Dakota. I thought it had to be a beautiful sight with the 49th Parallel, the Red River Valley, and the spot where Canada, North Dakota, and Minnesota join. I was not disappointed.

I enjoyed a conversation with Tom Nord, who started Nord Aviation at the airport in 1955. Then, the receptionist at the FBO, after hearing what I was up to, stamped and handed me a Fly North Dakota Airports Passport.

Then a Wisconsin friend asked if I had any advice for the creation of a Fly Wisconsin program. 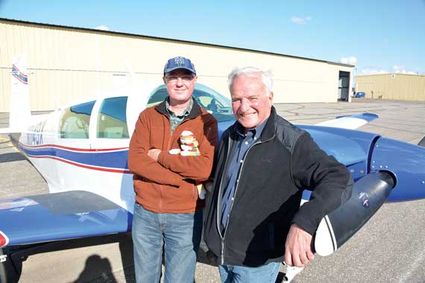 Jason Davis of KSTP-TV and the author, leaning comfortably on Gossman's Mooney. Gossman took Davis up for the last episode of On The Road.

Guess I'm going back to Red Wing's airport again! It's on their list, too.

Mitchell Gossman, MD, is an ophthalmologist practicing in St. Cloud, Minnesota, a private pilot for 25-plus years, currently flying a Mooney M20J.