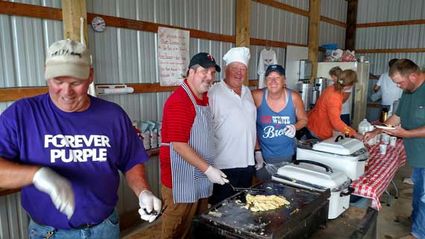 Thanks to Bob Heavirland for the following report and photos from the Isle Fly-In of July 7-8 Fly-In. Heavirland joined the Isle Flying Club three years ago. Isle Airport is a private grass strip maintained by its members. Current president, David Retka may be contacted at daveretka@gmail.com

The Isle Fly-In was a great event with really nice weather. We had over 50 planes. A J3 Cub flew in from as far as Crystal. We also had a Cessna from Grand Rapids. There were five airplanes from Forest Lake. We even had Ray Johnson fly in from Buffalo in his 1943 Stearman.

Patrick Heavirland flew in to the Isle Airport with his Aeronca Chief.

We served over 600 breakfasts. We planned for 500 so we had to run into town twice to get more food but that was great because, when you get that much attendance from locals driving in for breakfast, you get the feeling you are a welcome presence. People were visiting, and enjoying watching airplanes land and take off. Club members gave lots of airplane rides, too. It is so great to see the community support for such a beautiful grass airport.

We have two new hangars. Two of the existing hangars are being remodeled, too. They are getting new sheet metal siding. We want to do some improvements to the grounds, too. Nothing major, but we are discussing getting a water source on the property. We have an airport car and several bicycles available for folks who fly in who may want to go to town for a meal. There is also a convenience store on the lake shore, just across the street from the airport.

We have around 110 members but that may be on the conservative side. I know we had some members join the Sunday of the fly-in. The club members were really good about coming out to help with breakfast, setup and tear down.