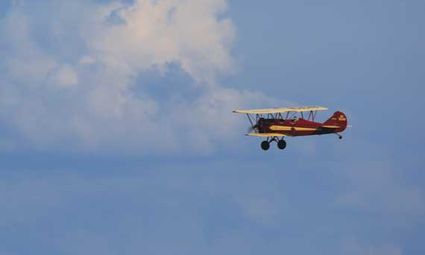 A 1928 Travel Air E-4000 owned by Pedro Langton from California heads into the Brainerd Lakes Regional Airport for the July 15-17 stop on the 2018 American Barnstormers Tour.

Brainerd Lakes Regional Airport was the only stop in Minnesota for the 2018 American Barnstormer's Tour.

Area residents took full advantage of all the July 15-17 event had to offer including rides in the vintage aircraft, a lineup of Model T automobiles, music from the 1920's and 30's sung by Mankato Barbershop Quartet, Oh Brother, and 5-cent popcorn, a price from1929, made fresh on the spot.

The fleet of this year's Barnstormer's Tour consisted exclusively of Travel Air aircraft manufactured between 1928 and 1929, and one from 1932.

The term, Barnstormers comes from the time after WWWI when pilots returning to the United States sought ways to make an income from flying. Some entrepreneurial types would fly over towns in the Midwest, land in a farmer's field next to a barn, and offer rides to townspeople.

The event at Brainerd Lakes Regional Airport paid tribute to those times by opening their facilities to the American Barnstormers who recreated that scenario in their vintage aircraft. 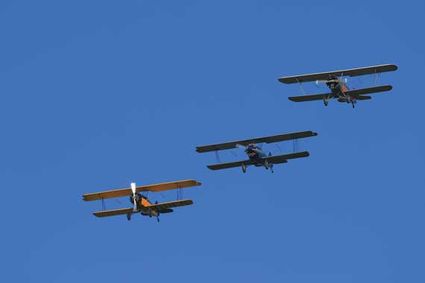 "I know how much he loves airplanes," said Amber. "He talks about them all the time. Every time they go over the top of the car he's always saying how he wants to be in an airplane.

"Jacob's has family that was in aviation. They would actually do wing walking. That was kind of cool. So, we have a little bit of airplane blood in him already."

Glenn "Lucky" Frith piloted a 1929 Travel Air D-4-D, owned by Richard Zeiler of California. How does it feel to fly a vintage aircraft?

"You would run out of ink trying to explain it," said Frith. "The feeling of freedom...you're almost like a bird because you're in the open cockpit. You're out there in the wind. The view when we left South Dakota, we took off just before the sun came up.

The sun coming up over the horizon, flying along, the air just as still as could be. There's nothing that can describe it. It's just absolutely fantastic. It's breathtaking."