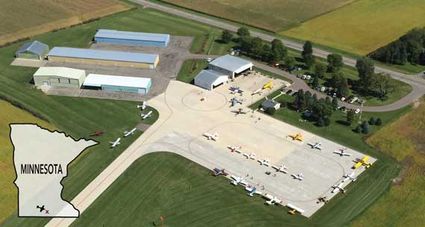 Interstate Highway 90 connects Boston to Seattle. It's the longest road in the United States. Like the first transcontinental railroad, I-90 was constructed from both ends toward the middle. When the railroad builders met in Utah in 1869, the last spike they drove was painted gold. The highway crews met in Blue Earth, Minnesota in 1978, commemorating the event by painting a "golden stripe" across the road. The stripe can be seen from the Blue Earth rest areas. Besides the historical significance, the rest stops are rather unique. They have a nature trail and a pedestrian tunnel connecting the east and west bound areas.

I-90 was constructed by the Federal Highway Administration. A conglomeration of companies that eventually became the Union Pacific built the railroad, the same line that serves Blue Earth today. Completing the local triumvirate of multi-modal transportation is the Blue Earth Municipal Airport. Originally built by three local pilots, the airport began operations in 1941 on a single sod runway. World War II slowed general aviation activity, but after the War, a second runway was constructed. A flight school also opened to train returning veterans using their GI Bill benefits.

Arthur Koskovich, one of the airport's founders, operated the flight school. Despite becoming afflicted with polio, Mr. Koskovich had a remarkable career in aviation. He taught himself to fly. He became an Instructor in 1946. His training program educated over 150 new pilots. In 2001, Arthur Koskovich was inducted into the Minnesota Aviation Hall of Fame.

Eventually, the City assumed ownership of the Airport. A series of improvements were implemented resulting in the airport becoming the first-class general aviation facility it is today. The primary 3,400 foot-long paved and lighted runway has PAPI, REILs, and GPS approaches. There's a full length parallel taxiway and plenty of parking space. The Arrival Departure building is open 24/7. Both jet fuel and avgas can be had on the same schedule. It's about three miles to town, but a courtesy car is available. On-call public transportation is another option. A turf runway is open during warmer weather. Blue Earth is home to over 30 airplanes, including a substantial fleet for agricultural work.

There's been an aerial applicator operating continuously at the airport for over 60 years. For almost half that time, it's been owned by one family. It is currently operated by Luke and Carly Steier. Dig into your archive for the September 1991 issue of the Minnesota Flyer to read about Luke's parents, Barb and Tim Steier. There's nothing cooler than a multi-generation aviation family.

This is farm country. Blue Earth has the world's largest statue of the Jolly Green Giant and a museum displaying a large collection of related memorabilia. Naturally, the City's annual celebration is "Giant Days", held during the second full weekend in July.

If you're on a $100 hamburger run, there's some good food available in town with a surprising variety. You just may end up with a $100 taco or egg roll. The Riverside Golf Course would be a good place to work off the calories. If you'd rather not ruin a good walk with golf, Little River Trail runs from downtown to the I-90 rest area. Unity Trail, which starts at the County Fair Grounds goes there, too. There's also the Steinberg Nature Park just outside town.

Aircraft parked on the Tarmac

The Blue Earth River, which got its name from clay deposits along the banks, virtually surrounds the City. French explorers were the first Europeans in the region. They mistook the clay for copper ore. Large samples were taken to France and analyzed with disappointing results. Local Dakota knew better. The clay is more black than blue. They called the clay and the river "Mahka-to".

If giants, golf, walking, or nature don't interest you, there's some great architecture in town. That includes Good Shepard Episcopal Church, which houses the first stain glass windows in Minnesota. The Church was built by Bishop Henry Wipple in 1872 and remains unaltered from the original construction. The Faribault County Court House was built in 1892. It is on the National Registry of Historic Sites. Faribault County does not include the city named Faribault. That's in Rice County. There is a Blue Earth County too, but the county seat sort of uses the Dakota name (Mankato). If that's confusing, just make sure you have KSBU as the last way-point in your GPS and you'll get to the right place.