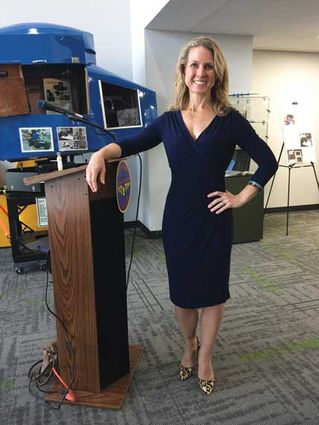 Major Heather Penney at the Wings of the North Museum was the guest speaker for fundraiser gathering, June 22-23.

Major Heather Penney held her audience captive recounting her experiences as an F-16 pilot called into action after the Pentagon was struck by terrorists on September 11, 2001. At the conclusion of her presentation at the Wings of the North Air Museum (WOTN) in June, Penney spent another length of time fielding questions from her interested listeners. 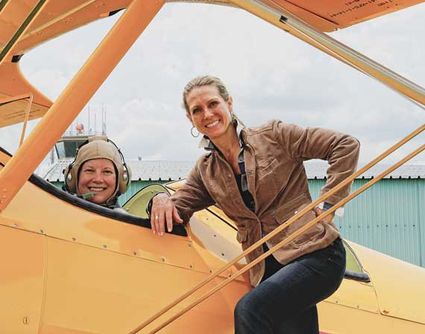 Brenda Peick of Thomson Reuters sits in the Wings of the North Air Museum Stearman biplane, flown by Naval Aviator Cadet George H.W. Bush in 1943. Leaning into the Stearman is Major Heather Penney, who provided Peick with a ride in the aircraft.

Yet, the focus of Major Penny's presentation was not on herself. It was on the "average, everyday Americans who answered the call," including firefighters, medical personnel, all people actively helping during that experience.

Maj. Penny went on to encourage girls (and boys) to face their challenges as they grow, stating that heroes are simply ordinary people who continue to pursue their goals in the face of opposition.

The two-day event was also a WOTN fundraiser. Brenda Peick of Thomson Reuters won a flight with Major Penney in the Wings of the North Air Museum Stearman biplane.

Saturday, June 23, Major Heather Penney lead a free Girls Fly Boldly experience at Flying Cloud Airport to encourage girls of all ages to explore where they might fit in the field of aviation.