Minnesota's Ten Most Important Aviation Persons, #10 in the series 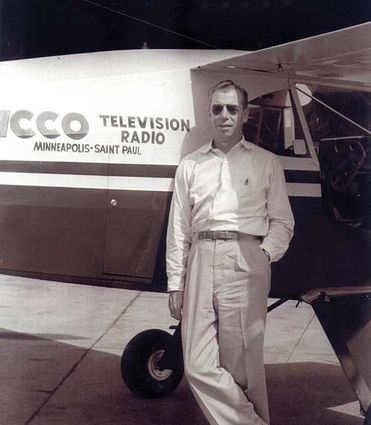 This is the final person in a list of the ten most important figures that have shaped Minnesota aviation over the years.

In previous chapters, you have learned about Clarence Hinck, Shorty DePonti, Speed Holman, Ray Miller, Walter Bullock, Max Conrad, Charles Lindbergh, Chuck Doyle and Jeff Hamiel. Each figure a giant in their field and known across the region for their accomplishments.

Saving for the last of my top ten, the one person who really made General Aviation known and respected in Minnesota, Sherm Booen, founder of this magazine.

Much has been written about Sherm and everyone is familiar with his legacy, but let me recount the reasons why he tops the list of Minnesota's most revered.

First of all know that Sherm was a true Minnesotan, born in Glenville near the Iowa border. He grew up and went to school in Minnesota, even played halfback on the Hamline College football team.

He was one of the first Ham radio operators in the State back in the late 1930s, an offshoot of his interest in radio broadcasting. During the 1940 Armistice Day blizzard, when the Albert Lea station where he worked went off the air during high winds, Booen used his home Ham radio to broadcast warnings, news bulletins, and directed rescue missions.

Having earned his Private License in the CPT program at the beginning of WWII, Sherm tried to become an Army Air Corp flight cadet, but less than perfect eyesight washed him out. Instead, he took a job with Minneapolis Honeywell as a Tech Rep. Honeywell was a contractor for the Department of Defense, and Sherm, with his knowledge of electronics, began testing early radar equipment.

During the war, as a Tech Rep, he was trained on the Honeywell C-1 autopilot. He helped develope a mobile C-1 trainer and was sent to numerous military bases in Italy to train bomber crews on the use of the device.

After WWII, he joined the Marine Corps Reserves and was called up for the Korean Conflict, spending his time in Japan, both as a broadcaster and an air traffic controller. He also became an instructor for the use of the Honeywell turbo-supercharger used on bomber engines.

With the end of the conflict, Sherm returned to Minneapolis, where he took a job with WDGY radio, using an airplane to gather news. He also produced an aviation news program. Then in 1953 began a 28 year run producing and emceeing World of Aviation, the aviation news program for WCCO Television. It was then the only aviation program on TV in the country, and still the longest lasting of any aviation program ever produced. Generations of us youth listened to his strong, deep voice each weekend, learning about aviation happenings and Sherm's fascinating flying fishing trips.

To the end of his life, just the sound of his voice recalled the thrill of their early years to persons meeting Sherm for the first time, or overhearing him speak.

In 1960, after working with MATA on an aviation news magazine, Sherm went it alone, taking a big step with his wife, Mavis, to begin a 26-year legacy of publishing The Minnesota Flyer Magazine.

His concern for the health of Minnesota aviation was foremost on his mind and he woke every day with a list of aviation-related activities on his schedule. And, he was a fine writer. Those who read old copies of the Flyer will marvel at his ability to convey his thoughts to the aviation fraternity.

He not only wrote, but filmed his own news stories and weekly adventures with the eye of a professional photographer. In 2002, Sherm was inducted into the Minnesota Broadcasting Hall of Fame.

Sherm made a major contribution to popularizing general aviation during his 30-year career as he Executive Director of the MATA (Minnesota Aviation Trades Association).

He worked with the FBOs around Minnesota, serving as liaison between them and the State Department of Aeronautics and the FAA.

He created the great Baseball Fly-Ins, bringing outstate fans flying in to metro airports to be bused to Twins games. His stage presence found him doing emcee work at airshows and fly-in breakfasts across the state, often twice a month or more.

His flying career spanned the time from 1939 to 2008 when he was awarded the Wright Brothers Master Pilot Award by the FAA for over fifty years of accident-free flying.

Sherm was always available to aid an aviation project. In the 1970s, he served on the steering committee that oversaw the creation of the Minnesota Aviation History Book, still referred to as the only definitive history on that subject. Sherm spent weeks at the Minnesota legislature lobbying for a grant to complete the book. His backing and support were the inspiration for its completion.

During the same period, Sherm worked with the State and museum enthusiasts to create an aviation museum and Hall of Fame. When funding never happened for the museum, he joined the work force that carried the Hall of fame into existence and served on its board for over ten years. He was rewarded in 1996 by being inducted into the Minnesota Aviation Hall of Fame.

Sherm was a strictly by-the-book pilot. He was approachable, happy to be among fellow aviation enthusiasts, loved his career and always had a funny story to tell.

He remembered people he had met before and enjoyed belonging to many organizations. His followers were legion. 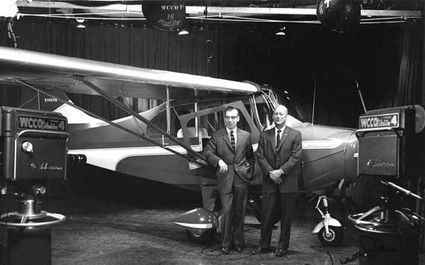 Gregg Nelson and Sherm. Nelson-Ryan was a sponsor of World of Aviation (1949).

Sherm Booen's life story would fill a volume. The above material is only the tip of the iceberg. It is obvious that, although this chapter comes as #10 in the series, Sherm Booen was the #1 most important person in Minnesota's aviation heritage.