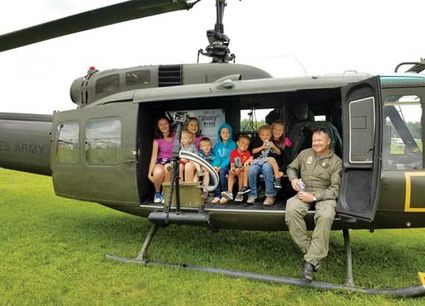 One of the most positive aspects of community airport events is the family friendliness component. Always the Sunday before Father’s Day, this year’s Rush City Fly-In of June 10, gathered people of all ages to see aircraft as inspiring as the UH1-H “Huey” Helicopter famously flown in the Vietnam War, a 1941 Stinson L-5 from the Minnesota Commemorative Air Force, piloted by Jerry Kyser, president of honor Flight Twin Cities, several T-6s piloted by Chuck Datko, John Bormes, and Chris Koelzer, and a T-28 piloted by Chuck Cook. 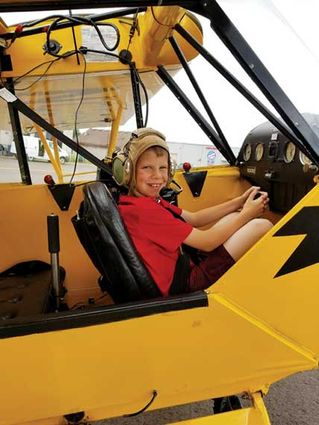 Caleb Ransdell, (11) from St. Joseph, Missouri looks like a natural in the Cub aircraft which was made available for kids to dream in at the Rush City Fly-In.

The Rush City Lions Club served a delicious pancake breakfast as Warbirds, vintage aircraft, and general aviation graced the air and the grounds for the enjoyment of attendees and their families. Time spent together resulted in the opportunity for intergenerational conversations where everyone learned from each other. The presentation of colors by the VFW/American Legion/Boy Scouts provided the chance for red, white, and blue pride to be instilled in the young, refreshed in the more experienced in the crowd. Members of the Air National Guard Museum were available for additional education on the history of aviation and its importance in the military.

Classic Cars, a raffle, and kids activities rounded out the day’s activities for the enjoyment of all.