Moose Lake Fly-In a bit under the weather 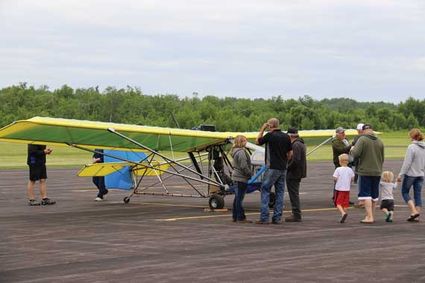 As is commonly known, inclement weather tends to put a damper on parades, lemonade stands, and aviation fly-ins. Such was the situation with the Moose Lake Carlton County Fly-In Breakfast, Saturday, June 16 when low clouds prevented the normally robust attendance by area pilots. Even though rain and the threat of rain kept many aviators from the airport, drive-in traffic was proof positive of interest in the annual event. 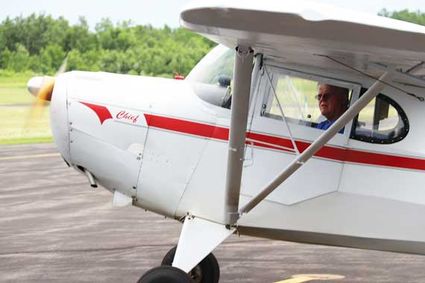 A 1938 Aeronca, owned by Lyn Ray of Carlton, was on display at the Fly-In/Drive-In event at the Moose Lake-Carlton County Airport. Though a good crowd of people drove in, the weather was not conducive to flying.

Glen Kowitz of Moose Lake had his Ultralight T-Bird on display on the tarmac, much to the delight of interested visitors. Carlton resident, Lynn Ray drew attention with his 1938, high wing, tail dragger, Aeronca Chief. Robert Matarelli Jr., also from Carlton welcomed close up views of his 1961 Cessna.

Members of the Moose Lake Kiwanis Club were kept busy making pancakes and sausages for attendees who drove in. The Moose Lake Area Fire Department also displayed its newest acquisition in fire trucks for folks to explore. Lois E. Johnson, a reporter from the local newspaper, the Moose Lake Star Gazette covered the event, noting its importance in the community. Johnson shared her photos with Minnesota Flyer readers.

Though air traffic was low at this year’s Fly-In/Drive-In, attitudes of attendees were positive, and hopes high for clear skies and sunny weather for next year’s gathering.