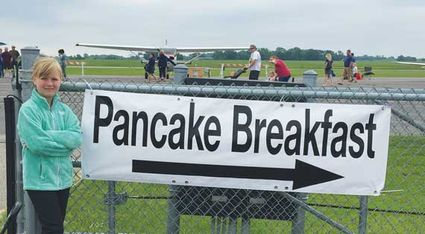 Buffalo Airport was the place to be June 10 for the sights and sounds of Mike Wiskus of West Metro Aviation and his Pitts S- 1-11B aerobatics aircraft. Wiskus flew right side up, upside down, tail down, nose down, vertical climb, extreme dive, and any other possible position in which man commands his aircraft to fly for the thrill of the crowd. 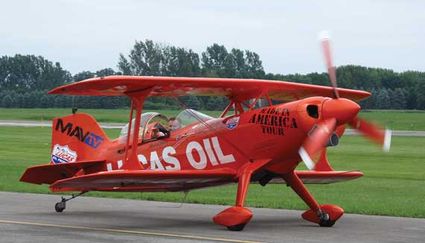 High performance aerobatics pilot, Mike Wiskus of West Metro Aviation flew his Pitts S-1-11B in a variety of positions including sideways and upside down during the air show.

In a surprise guest appearance, stunt pilot, Craig Gifford also gave the eyeballs of attendees something to fasten on with an air show performance of his own. General aviation aircraft, including a vintage Stinson bi-plane brought visitors to the airport prior to the airshow. A large crowd of visitors wandered up and down the tarmac, peering into, under, and over the aircraft, many asking questions of the pilots standing near.

In addition to a yummy pancake breakfast served by EAA Chapter 878, other vendors on the grounds next to the Classic Car Show offered mid-day meat fresh off the grill. The weather was a mix of cool breezes, decorator clouds, and warm sunshine which made for a pleasant visitor experience.