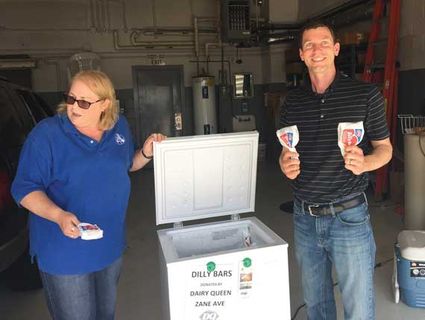 Kathy Kramer of the Metropolitan Airports Commission, and Phil Tiedeman, endear people's hearts by hading out Dilly Bars donated by the local Dairy Queen to beat the heat on the over 90 degree day.

Nothing cools off an extremely hot day like free ice cream and taking a turn at letting water escape from an official fire hose. Kids visiting the Crystal Airport Fly-In on an upper 90-degree day for their June 17 Fly-In, had the opportunity to do both. Though cloud cover graciously lent some relief from the sun's rays, high humidity pushed perceived temps up enough for the local Dairy Queen owner to offer several freezers full of free Dilly Bars to attendees of the event. Crystal Airport Manager, Phil Tiedman and Metropolitan Airports Commission rep Kathy Kramer happily handed out the cold treats to grateful traversers of the hot tarmac. 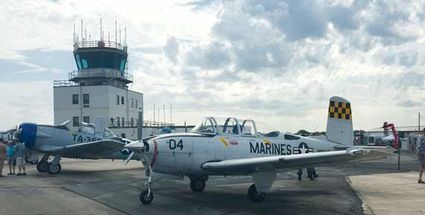 The Crystal Fire Department was on hand to watch over children as they lived their dream of hanging on to a fire hose and letting the water flow. The firefighters wisely set up spinning targets as a goal for the water's destination.

All the while, people were treated to aircraft coming and going, single file or in formation, in the air and on the ground where onlookers were invited for close up views and for opportunities to have questions answered by those with skills to fly the spectacular machines.