Air show put together through blood, sweat and volunteers

An archived photo from the last day of the Wings of the North AirExpo 2013 where volunteers engage in the tradition of standing for a group photo with the B-17 Yankee Lady as a backdrop.

Phil Fisher was drawn into the field of aviation through his certified welding skills and desire to help others. Over 27 years ago, a friend of Fisher's, who was also a member of the Planes of Fame aviation group asked if he would be willing to come to a hangar to help with some welding needs. The answer was yes, not only to do welding jobs, but eventually to become a member of the group.

When Planes of Fame moved its aircraft to Palm Springs, Fisher remained in Minneapolis where he was born and raised. Having been bitten by the aviation bug, he offered his time and talent to Polar Aviation, a group based at Anoka County Blaine Airport.

In the meantime, several past Planes of Fame members formed the Wings of the North aviation group, putting together a Mustang Roundup in 1998 and 1999. Fisher accepted an invitation to become a member of Wings of the North where, in addition to welding, he expanded his volunteer capacity to Admissions Coordinator at subsequent AirExpo events.

"I welded the stand for a 30-foot banner that said, 'Welcome to AirExpo,'" said Fisher. "I made a couple flagpoles and the standards for the flagpoles so we could fly an American flag and the state of Minnesota flag. Then, to make it as special as we could, we put the MIA and POW flags underneath the American flag. That made admissions look really sharp."

The Admissions Coordinator oversees volunteers stationed at the entry gate, and sees to the needs of people with disabilities, special groups, and visitors in general.

"I told the people who were working with me at the admissions area, we are the first ones people are going to see," said Fisher. "I'd tell them, let's greet everybody with a great big smile. I want you guys to have a good time, to have fun. When visitors see you having fun, they are going to go in to the AirExpo with the same attitude."

Sue, Fisher's wife of 28 years, is a volunteer as well.

"When I was working out at the museum, I said, it's not right for me to be out here and not have my wife with me," said Fisher. "I said, why can't you come out to the air museum with me? We can both have fun together."

The couple have been volunteering ever since.

"I enjoy meeting the vendors and going around speaking with the WW II Veterans," said Sue Fisher. "I met a lady who worked in the underground during the Second World War from the time she was 12 until the war ended. Her family had a secret room where they would take in soldiers. I thought, wow, to be able to hear that first hand. You get an idea of what maybe they went through and what life was like for them during the Second World War. I've just met many wonderful people there."

"It was by far the most rewarding thing I've ever done in my life," said Mattson. "Getting to meet true legends and heroes of World War II aviation was just absolutely phenomenal."

After six years in admissions, Phil Fisher began assisting Bruce Mattson who was working out arrangements with vendors, military personnel, and state and federal agencies for the annual AirExpo.

"I wanted to see a little bit more about what was going on so I told Bruce I would be willing to help," said Fisher. "I worked with Bruce for four or five years. Then, they eventually asked me to take over so I've been doing it ever since. It's been about nine years now."

"Phil was an excellent protégé," said Mattson. "He has always been the kind of person who wants to learn, wants to do more. He has done an excellent job."

Renee Martschinske, another volunteer for the AirExpo encourages people to consider volunteering.

"I would recommend volunteering because it's a way you can enrich your life," said Martschinske. "You can learn new things. You can meet people who say or do something that will influence your life for the better. Also, it's just a fun way to spend time with some fabulous people around fabulous airplanes and other components of aviation."

Phil Fisher is grateful for all the people with whom he has associated in his lifetime of volunteering. When it comes to thanking them, his wife is first on the list. 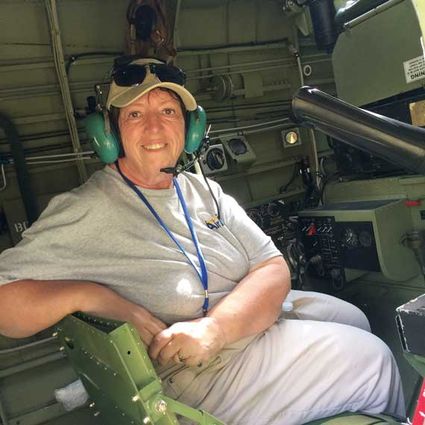 Renee Martschinske, volunteer at Wings of the North AirExpo prepares for a ride in the TBM Avenger, now on permanent display at the museum.

"If it wasn't for my wife and how supportive she has been of me, I would be in big trouble," said Fisher. "She's a sweetheart. When I married her, I married a gem."

"A very special thank you to a gentleman who has become a wonderful friend, mentor, and person who has helped me to become what I am as far as a director of vendors. That is Bruce Mattson."

As he goes on to name Carroll Abendroth, Abendroth's daughter Alicia and granddaughter Arian, and grounds director, Jim Maki, Fisher appears willing to mention everyone by name. That not being possible, he settles for a final statement.

"I have to give all the members of Wings of the North a big thank you because without them and their support I wouldn't be able to do what I'm doing now. Those people are fantastic. They've been very nice to me. If I could give each one of them a hug right now, I would.