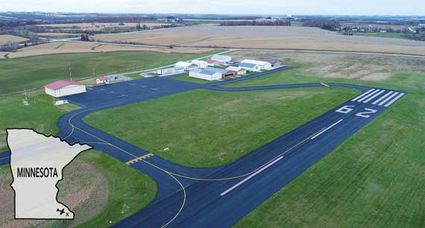 In 1858, Minnesota became the 32nd State of the Union. The new state's most populous county had about 13,000 residents, but it wasn't named after Louis Hennepin or Alexander Ramsey. That honor went to Millard Fillmore, who was president in 1853 when the county was incorporated. In the 21st century, Fillmore County has a population of about 21,000. It may no longer have the most people of any Minnesota county, but it could well have the best scenery.

This is a part of the state that resembles Pennsylvania more than it does the rest of the Minnesota. Bluffs and valleys are the primary terrain features. Preston is the county seat located in one of the valleys on the banks of the Root River. Five miles west, on a prominent bluff, is the Preston-Fillmore County Airport.

Owned and operated by the County, this airport has everything a General Aviation facility should have. The runway is 4,000 feet long and can accommodate 100 per cent of the world's small aircraft.

A full length parallel taxiway expedites traffic to and from the runway. GPS approach procedures provide guidance when meteorological conditions are less than ideal, and an automated weather system (AWOS) tells pilots when to use them. Precision Approach Path Indicators (PAPI) and Runway End Identifier Lights (REILs) help with visual clues.

A well-kept Arrival/Departure building has meeting and flight planning facilities. The A/D building was opened in 1981, dedicated to Bernard Pietenpol, Fillmore County's claim to aviation fame.

Pietenpol's well deserved reputation came from designing the world's first successful "home-built" airplanes, thus starting an entire aviation movement. He also operated the first airport in Fillmore County near his home in Cherry Grove. Pietenpol sold hardware there and taught himself to fly at his airfield. He later built a hangar and workshop. Pietenpol's best known designs are the "Air Camper" with two seats, and the single seat "Sky Scout." Prototypes of both aircraft were assembled, and test flown in Cherry Grove.

The Fillmore County History and Genealogy Center in Fountain has examples of both airplanes on display. Pietenpol's workshop is on the National Register of Historic Places and the airfield is still visible.

The hangar was moved to Pioneer Airfield at the Experimental Aircraft Association Museum in Oshkosh Wisconsin, where it stands as an appropriate shrine to the EAA's first disciple.

It's about 15 miles from the Fillmore County Airport to Cherry Grove. It's a beautiful drive. Mystery Cave State Park is along the way. Fillmore County has four public golf courses and a network of paved trails that follow the Root River for 60 miles. Several cities in Fillmore County participate in a "bike share" program that's free of charge so you don't have to cram your bike in the Cessna to ride on the trails. Walkers and runners are welcome, too.

Preston is "Minnesota's Trout Capital", and home of the "National Trout Center." The Root River and its tributaries claim to be the "world's best trout streams." Naturally, the City's big event is "Trout Days" in May. The festivities include a fishing contest (of course), parade, street dance, car show, lots of food, and possibly some beer. The airport hosts a fly-in in July, but apparently it doesn't involve fish.

The landing strip in Cherry Grove might have served Pietenpol's needs very well, but by the 1960s Fillmore County recognized the need for an airport that could handle more sophisticated aircraft. Land acquisition was started in 1967 and operations began on a turf runway in 1970. In 1975 the runway was paved and lighted, then extended to 4,000 feet in 1989. The parallel taxiway was added in 2005.

Modest population growth since statehood has allowed Fillmore County to maintain it's rural charm. "If you're stressed out in Fillmore County, it's your own darn fault," is a sort of an unofficial motto.

A large Amish community adds to the ambiance. They make and sell some of the world's highest quality home furnishings. Amish people are in a gentle rebellion against modern technology, but the county they live in operates a state of the art airport. So, you can fly there to relax while avoiding the stress that goes with a road trip.