#325--The American Champion Denali Scout "The Once and Future Champ" 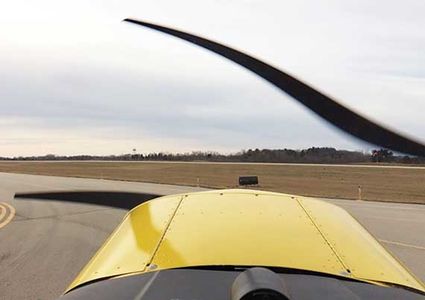 I wanted to show the superb visibility over the nose while taxiing. Since I was flying from the rear seat, I asked Bob to shoot a "pilot's eye view"---and the camera caught the "strobe" effect in the shutter.

Though built on the same type certificate as the original Scout, there are enough changes for me to consider this as a different type/model rating. The tail, the aileron spades, the landing gear, the electrical system, the prop, and the landing gear are all different. Long-time readers know that I don't count a new type unless I make a takeoff or landing in it-no "holding the controls." Making a takeoff or landing lets me feel the aircraft in a wide range of speeds and configurations. I wondered how to ask Bob for the privilege. Yes, I'm tailwheel-current, but this is his NEW BABY! I was surprised when he said, "Take it around the patch-you don't need me!" There was NO WAY I was going to do this by myself-no time to read the manuals, unfamiliarity with the radios and engine monitoring gauges, and the added issue of engine break-in on a new airplane. I suggested letting me fly from the back seat (I have a lot of time instructing in the back seat) and letting him handle the radios and take photos while I flew. In the event we had a problem with the airplane, he would be in the best position to handle it-after all HE has 3 whole hours (and 3 landings) in the aircraft!

Bob fired up the engine and avionics, and we taxied to the active runway. Since I would be making the takeoff, I asked if I might taxi it from my rear-seat position to get a feel for the brakes and ground handling. I was pleasantly surprised with the very positive tailwheel steering and brake effectiveness-a far cry from the solid-rubber tiny tailwheel and the heel-activated mechanical brakes on the Champ. After completing the run-up, we were ready to fly!

Since I couldn't see the gauges in the front seat, I asked Bob about "unstick speed" and climb speed, and he replied "60 and 90 seem to work well". I applied power, and by the time the throttle was 1/3 open, it felt just like an old Champ-by the time the throttle was 2/3 open, it felt like a Citabria, and we were off the ground. By the time I got the throttle all the way open, it was like no Champ I'd ever flown before! I asked Bob for a LOT of forward elevator trim (trim on the Scout is on the left sidewall instead of the overhead like earlier Champs). "Just pull

the stick back more-you're going over 100 mph already!" I continued the climb by turning crosswind and downwind-and by the time we were on downwind, we were almost 2000 feet above the airport! "How fast are we climbing?" I asked, and Bob replied "over 1500 feet per minute"-this with 50 gallons of fuel and 500# in the cabin! I told Bob "take a photo-people aren't going to believe this!"

Since the engine was still being broken in, we didn't do any stalls or slow flight-"run the engine hard and keep it cool" is the generally accepted method for break-in. I rolled from bank to bank doing 90 degree turns to check stick pressures and control harmony-though I couldn't see the turn and slip indicator, one of the benefits of instructing from the back seat on a tandem-seating airplane is that any rudder transgressions are readily apparent-and Bob didn't chastise me. The aileron spades (common on aerobatic aircraft) make the controls much lighter than the old Scouts. We took the panel photos and headed back to the airport. Because of the engine break-in regimen, we wouldn't be doing any touch & goes. Bob laid claim to the landing, and I noticed he didn't use full flaps. I later asked him why he didn't use them-he mentioned something about "Hey, this is only my 4th landing in the airplane!" He slipped off some excess altitude, and the arrival was "firm". It wasn't bad, it's just that he was about 1 foot too low in the flare. He blamed it on the extra-tall spring steel landing gear, and I believe him-it DOES sit very tall!

I was honored to fly his new airplane-I was only the third person to ever fly it!

With the low production rates of new airplanes, very few of us have ever been able to fly an airplane right off the place it was produced. It's a sense of exhilaration, a sense of pride ("yes, this is the airplane that I CAUSED to be created"), a sense of caution ("this airplane has only been flying for an hour or two its entire LIFE-I hope everything works right!")

The last new airplane I flew was my Kitfox homebuilt, 16 years ago. We built it when I had an FBO at Faribault airport. It was a learning lesson for everyone-even though some of the mechanics had learned fabric work in school, they hadn't had much experience with the process. Our head mechanic Wayne Trom oversaw the project as multiple people lent a hand. I was flying a lot of corporate trips, and one day, Wayne called and said "it's an airplane!" The FAA inspected it and signed off on the required test program, and since he built it and has a lot of experience flying repaired airplanes, Wayne took it up. It flew fine right from the first flight. Since passengers couldn't be carried during the test period, I couldn't accompany him, and the next flight was up to me. It was with some trepidation that I approached the flight-a careful preflight-good weather, reading the manual, coaching from Wayne, and a very limited "test card" of things to do. It would be a local flight only-no touch and goes, only full stops. I went through the checklist, pulled into takeoff position, took a deep breath, and pushed the throttle forward. The takeoff was incredibly short, the climb was steep, and in no time "we" (the airplane and me) were in cruise flight. We expanded the flight test envelope gradually, and as we did so, I built up confidence.

In the mid 1970s, I worked for a Cessna dealer. We would regularly go to Wichita to bring back new 172s, 150/152s, Skylanes, and 206s. They were pumping out airplanes by the thousands back then, and they would have a ceremonial "handover" to the new owner-a presentation of the logbooks-a checklist to make sure that all required paperwork was in order-a checklist to make sure that all equipment was working when delivered, and the hand-over of the keys. Factory test pilots were available to answer questions, which usually fell into three categories. "What is your recommendation for engine break-in?" ("Minimum time on the ground, keep it cool in the air, run it hard (75%), don't lean the mixture"), "How does THIS _____work?" (answered by a factory test pilot), and "How often does something go wrong?" (ALSO answered by a factory test pilot-the answer was "rarely do things go wrong on delivery flights). I found out the last item was true as far as it went-but it was not uncommon to have problems up to 200 hours later.

In any case, I never flew actual IFR on a delivery flight (though I DID usually file so that I could test the equipment, and so someone knew where I was if I DID have problems!) I always flew with "one eye on the gauges"-waiting for that first telltale engine shudder or gauge anomaly. 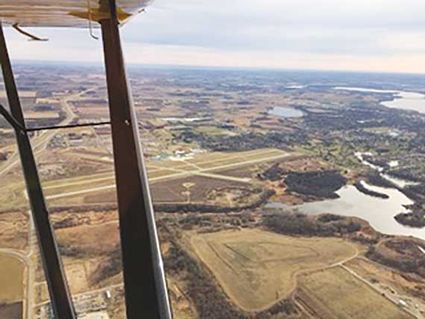 We are over 2000' above the airport less than 2 minutes after the first photo was taken!

There are less than 1000 new airplanes produced in the U.S. per year, so few of us get the thrill of making "first flights" on an airplane. The same cautions apply when ferrying used airplanes, post-maintenance test flights, new engine installations, or test-flying experimental airplanes. It's an adrenalin high-kind of like mountain climbing, car racing, or skydiving-there's always some risk, but the risk can be dealt with and managed. You'll feel great about the experience after having dealt with it. The high is even BETTER when the new airplane is YOURS!

Jim Hanson is in his 56th year of flying all kinds of airplanes. He is the long-time FBO at Albert Lea, MN. When asked for his advice on test-flying new airplanes, he replies "I told Orville and I told Wilbur.........." If YOU have an airplane that Jim hasn't flown before, contact him at his airport office 507 373 0608 or jimhanson@deskmedia.com