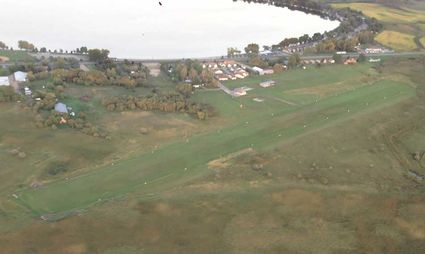 Starbuck, what a great name for a great town! The City wasn't named after the first mate in "Moby Dick," or the fighter pilot in "Battlestar Galactica." The consensus is it got that unusual name from a 19th century railroad tycoon, William H. Starbuck who financed the Little Falls and Dakota Railroad. Another story has the place named for a pair of oxen named Star and Buck who worked on building the railroad. Or maybe a railroad worker was having some fun at the boss's expense. No matter how it got the name, it's a wonderful place with a great airport. Located on the shore of Lake Minnewaska, Starbuck Municipal Airport is certainly one of the most scenic spots in Minnesota.

Back in the 1950s, a flat grassy area on the edge of town became an informal airport. Delbert Anderson was a well-known legislator whose district included Starbuck. In 1958, he helped secure funds to build the turf runway. The first hangar was completed in 1958, and the modern A/D building was opened in 1995. A lighting upgrade was completed in 2015.

Maurice Amundson earned his pilot's license the year before the runway was built. For over 40 years the local farmer was famous for offering anyone who showed an interest in aviation their first airplane ride.

The turf runway is still 2500 feet long and has the best grass in Minnesota that is not on a golf course. You can check that out at the nearby Minnewaska Golf Course. The runway has a modern lighting system that includes Medium Intensity Runway Lights (MIRLs) and Runway End Identifiers (REILs), all LED. It would be hard to find another turf runway with a more sophisticated electrical system. There's a rotating beacon to help you spot the place in the dark, and the parking area has plenty space for transient aircraft. Camping on the airport is encouraged. The Arrival/Departure building is accessible 24/7. Facilities in the A/D building include showers and a kitchen, as well as the usual meeting and flight planning areas.

If you're not up for golf, one of the top-rated swimming beaches in Minnesota is just one block from the airport. Adjacent to the airport is an eight-foot-wide paved bike trail that's also good for walking or running. Head south on the trail and you'll come to Glacial Lakes State Park, but that's almost 5 miles so bring your hiking boots. If you turn north in less than a quarter of a mile, you'll find yourself in downtown. There, you can visit the old railroad depot, now the city museum, and in the national historical registry. A lake shore park where they host the Dragon Boat Festival in August is next to downtown. There's also a marina, and some good eating places within walking distance of the airport. Other City facilities include several more parks, and the "Hobo Park" Camp Ground. Pope County has more paved bike trails, and motorized ground transportation can be reserved through the county transit system.

Yet another theory about Starbuck is that it was named for the city of Stabekk in Norway. A lot of Norwegian-Americans live in Starbuck, so it may be true. Naturally, they made world's biggest Lefse (9'8" and 70 pounds) for the City's centennial celebration in 1983. The giant Lefse can be seen at the depot, but no mention of how much lutefisk goes with it. Starbuck celebrates this feat with Lefse Dagen in May. There's also Elpe Tiden (apple harvest) in September, but the big celebration is Heritage Days. That happens on the weekend closest to July 4, and lasts four days (Thursday to Sunday). On Saturday the Pope County Flyers hold a pancake breakfast at the Airport. Get there early, because they usual attract more than 1,200 people and over 50 airplanes. Then stay late for the fireworks, which are done right next to the field. In between, there's a parade with 80 to 100 units, and a rib fest so you don't get hungry. Or just have a nap. Remember camping at the airport is encouraged.

The citizens of Starbuck pride themselves in their city's "charm, heritage and hospitality. They have good reasons to make that claim. You won't find the Pequod moored in the marina or a Viper parked at the airport, but a trip to Starbuck would still make a fun flight.