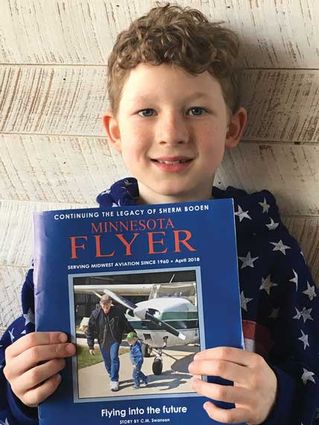 Seven-year-old Phoenix Thiel holds a copy of the April issue of the Minnesota Flyer magazine displaying him and Grandpa Steve Young on the cover as well as a feature article inside written by "Poppa" Young about how he was inspired to become active in aviation once again because of interest Phoenix showed for airplanes.

Grandpa Steve Young reported that grandson Phoenix was delightfully surprised with the cover and feature story in the April Issue of the Minnesota Flyer magazine.

"Surprised" is the key word as Grandpa had not told the young aviation enthusiast he was going to appear in the magazine.

The two have been supporting each other's love of aviation for several years.

The Minnesota Flyer invites readers to share your stories of how you inspire youth with the joys of general aviation.