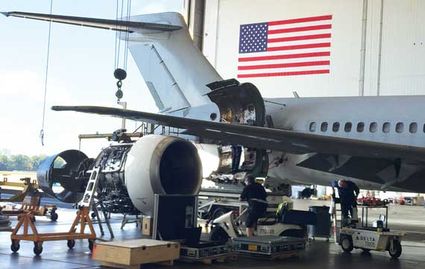 Maintenance crew performing an engine change in Hangar 8 on an MD90.

If the idea of a three-digit income, variety in the workplace, and free airline tickets to anywhere in the world is appealing, becoming an Airframe and Powerplant (A&P) Mechanic for a major airline may be just the right fit for you. Understanding the diversity of opportunities afforded an A&P may also help you make your decision.

"There are all kinds of aspects and different categories of this job," said Delta Airlines A&P Kevin Hill. "It's not limited to just working on airplanes."

Having worked in the field for over 40 years, 35 of which have been at the Minneapolis St. Paul Airport, Hill is familiar with choices involved in the job.

"Maybe you want to work in an avionics shop and redo instruments and computer boxes," said Hill. "That's an A&P mechanic's job. We work with computers, electronics, avionics, (which is navigation), pneumatics, and hydraulics. Or maybe you prefer a check hangar job where you tear everything apart and put it back together again. In that situation, it's the group, not just one person, who is responsible for the airplane. You may want to get into management. That's there, too."

It all begins with school. The Federal Aviation Administration (FAA) requires an A&P certificate to legally work on aircraft. Training takes about two years, depending on the school.

Currently, the prospect for work as an A&P is excellent. According to an article by Amelia Walsh posted at AOPA online in March, the Boeing corporation estimates nearly 120,000 new technicians will be needed in North America over the next two decades. However, the need is not limited to North America. A&P Mechanics are in demand globally.

"You can travel all over the world if you want to," said Kevin Hill. "I've gone to Guam to change a throttle cable on a DC10. I've done repair on a lot of military charters in Germany, Saudi Arabia, Kuwait. When the request comes in, you just get your tools and the necessary parts and away you go."

One of the benefits of working for a major airline is free recreational travel, though they are placed on a standby basis.

Work schedules for A&Ps at major airlines vary in hours per day, number of days per week, and location of department, which can be outdoors when working the line as aircraft come in, or indoors where aircraft are moved for more involved repairs.

"Maintenance is 24/7, every day of the year including holidays," said Hill. "Maintenance crews have to be available to keep airlines going. I've worked third shift. I've worked second shift. I worked a shift called Odd Ball one time, which was 8 at night until 4 in the morning, which I really liked. Now I'm on day shift but I still have rotating days off."

A&Ps hold a great deal of responsibility, therefore, there are many checks and balances in the maintenance process, including ongoing inspections.

"When you're working on an airplane that could hold as many as 400 people," said Hill, "that's a lot of responsibility." 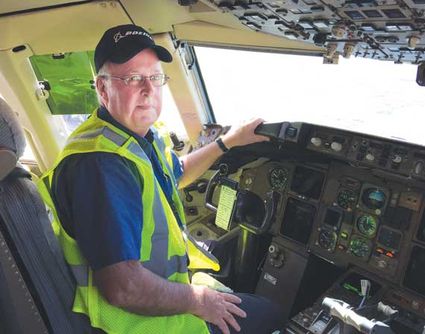 Delta A&P Mechanic Kevin Hill in the cockpit of a Boeing 757. Before the pilot boards the aircraft, the A&P Mechanic has made sure everything is in working order.

"We make sure all the rules are followed and everything is done by the book," said Delta Airlines Inspector Philip Vogal. "We work with the mechanics. We're here to back up the mechanics. The more critical the situation, the more in-process inspections there are."

Due to the ever changing world of technology, A&P training is ongoing.

"Once you get out of A&P school, it doesn't mean your training ends," said Hill, who is certified to work on 11 different types of aircraft. "I've been to all the schools for all the airplanes Delta has. You are constantly learning. Nobody knows everything."

Even with over 40 years in industry, the veteran A&P is still enthusiastic about aviation. He even has his private pilot license.

"I love aviation," said Hill. "I even like watching the planes as they come and go from here. I strongly recommend this job to young people. If you have an interest in computers and mechanics, and you want good pay and benefits, it's a great job."