#325--The American Champion Denali Scout "The Once and Future Champ"

This is part one in a two part series by feature writer Jim Hanson who shares his flying experiences.

With 4 wing mounted and one cowl-mounted landing lights, the Scout is assured of good illumination at night--and for spotting it during the day, the lights "wig-wag" on and off alternately

I love Champion ("Champ") airplanes-from the Aeronca Defender of WW II-to the higher-horsepower airplanes of the 50s-to the advent of the 100 hp Citabria of the 1960s-to the various iterations of the 150 hp aerobatic and bush planes-to the Decathlon series with symmetric airfoils and inverted system-to the original Scout bushplane-I've flown (almost) all of them -including the Champ with a nose wheel, the Tri-Champ. I HAVE missed two rare models-the twin-engine Champion Lancer-which hung 100 hp. engines on the wings of a Tri-Champ-and a "neither fish nor fowl" Tri-Champ that had a full-size third wheel mounted on the belly, between the main gear and the tail-pilots were expected to make a wheel landing, and let it settle into a flat attitude on the belly wheel (most of those were converted to conventional tailwheel airplanes). Though I've never seen the third missing example except in a magazine advertisement, they did show a bigger Champ with 3 businessmen climbing aboard-one in front and two in back, like a Piper Super Cruiser. I can find no information on those. IF YOU HAVE ANY OF THE MISSING CHAMPS MENTIONED ABOVE, I'D LOVE TO FLY IT!

I always liked the Champ series for a number of reasons. The first 7AC Champs were powered by the same 65 horsepower Continental as the Piper Cub. Like the Cub, the 7AC didn't have an electrical system or starter, either. Unlike the Cub, the Champ could be soloed from the front seat-giving far better visibility. Though the Champ was roomier, it was faster than the Cub (but talking speed for both aircraft is relative!). The Cub has the edge in short-field operations-but the difference was little more than a plane-length in takeoff or landing between the two. I instructed in Champs and Super Cubs in an Army flying club, and found the Champ to be much roomier and easy to get in and out of than the Cub, which had the wing strut right in front of the door, felt that the Champ had smoother and more responsive controls. The Champ wins hands-down when it comes to visibility-the large windows extend all the way to the tail, giving nearly "Control-tower" visibility. Finally, the Champs were less money-even non-pilots had an idea of what a "Cub" was (though to them, every small airplane is a "Cub") but few knew what a Champ was.

Bob Lynn of Louisville, Colorado is a long-time soaring friend. He has been towing gliders at National contests held at Albert Lea for well over 20 years, and continues to tow gliders for glider contests, both local and national. 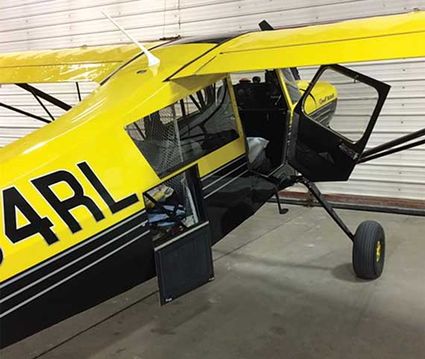 It's pretty rare that anyone gets to fly a brand-new airplane today. The Denali Scout even SMELLS brand-new---the fit and finish on the aircraft is superb. Note the external baggage door.

Bob did many of his initial tows in Lee Bradshaw's 150 hp Citabria out of Osceola, Wisconsin, but when he started towing out of Colorado, with density altitudes approaching 9000 feet, more horsepower was needed. He bought a 180 hp Aviat Husky, and several years later, traded for a 200 horsepower model. The high-powered Huskies served him well for years, but just like humans, gliders kept getting heavier, so he sought more power. Lycoming came out with the IO-390 engine, with 210 horsepower-and American Champion made it optional on the Scout. The combination got Bob's attention.

American Champion is located in Rochester, Wisconsin (near Milwaukee). They build their aircraft to order. After comparing prices vs. a new Husky-there was a substantial difference in price between the two. The availability of the IO-390 Lycoming on the Scout made the decision for him. After consulting with his wife (who he admits controls the finances in the family) they decided to buy new-

and ordered the Denali Scout.

Jim Hanson is in his 56th year of flying all kinds of airplanes. He is the long-time FBO at Albert Lea, MN. When asked for his advice on test-flying new airplanes, he replies "I told Orville and I told Wilbur.........." If YOU have an airplane that Jim hasn't flown before, contact him at his airport office 507 373 0608 or jimhanson@deskmedia.com