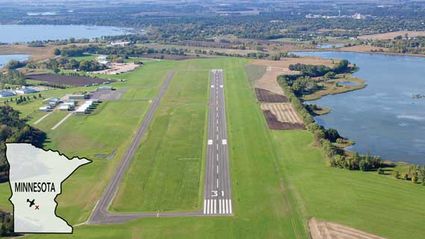 Litchfield has some great history. The City is named for E. Darwin Litchfield, whose brother was Egbert E. Litchfield, founded the St. Paul and Pacific Railroad. Darwin was a major investor in the Railroad. The town was settled in 1855 and incorporated in 1872. After the American Civil War, Union veterans formed the "Grand Army of the Republic", or GAR. It was much like the present-day American Legion with meeting halls and social events. The last original G.A.R. Hall is in Litchfield. It's a gorgeous building and is now the home of the Meeker County Historical Society. The downtown is a "Commercial Historic District" that includes the restored Opera House from 1900 and Trinity Episcopal Church. The Church was built in 1871 and designed by Richard Upjohn, the founder of the American Institute of Architects (AIA).

On the southwest side of town is a lake named for the town's first doctor, F.N. Ripley. Unfortunately, Dr. Ripley froze to death on the lake shore in 1856. That's kind of a tough way to get something named after you. To the Southeast is the Litchfield Municipal Airport. Farther to the southeast is the Darwin VOR (Very High Frequency Omni-Range in case you forgot). It's probably the only air navigation aid named after a railroad investor.

When the Litchfield automated weather system (AWOS) says the conditions aren't so hot, you can use "Darwin" to make a VOR approach. VORs are something that no doubt will soon be history too, so go try it while you can. For 21st Century pilots, there's RNAV/GPS approaches to both ends of the main runway that include LPV with precision approach minimums. The paved runway is 4000 feet long and equipped with all the modern lightening systems. A full parallel taxiway leads to the spacious parking ramp. The Arrival/Departure Building has meeting space and a flight planning area. Fueling is self-service, and there's a courtesy car available.

This is Litchfield's second airport. The original was closer to town and opened shortly after World War II. By 1953 there was a 2800-foot-long turf runway and a single hangar. The runway was later paved and lighted. Hangar space was added, but the old airport was right next to the County Fair Grounds. On the north end, expansion was blocked by a creek and the City's sewage plant. To the south two schools and a housing subdivision also limited the airport's potential. With the local aviation needs growing, the City moved the facility to the current location in 1987. Having a new airport certainly made Litchfield popular. There are now 28 aircraft based at the airport, housed in 18 hangars.

Two of Minnesota's early aviation pioneers were brothers who grew up in Litchfield. During World War I, Clarence (better known as C.W.) Hinck was a student in the Navy's aviation training program at the Dunwoody Institute in Minneapolis. He was one of the founders of Federated Flyers, Minnesota's first commercial flying service. Federated was known for their "barnstorming", and operated a flight school. Elmer Hinck was an infantry soldier in the same war. He came home and learned to fly at his brother's school, later working there as a stunt pilot. He eventually became Minnesota's premier flight instructor, and owned several flight schools in the Twin Cities. During World War II Clarence and Elmer contracted with the Army to train pilots. Elmer ran the school, but unfortunately died in a training accident. After the war, Clarence became the Minnesota dealer for the Republic "Seabee". Minnesota's Aviation Hall of Fame inducted the Hinck brothers in 1990 and 1991 respectively.

If history isn't your thing, Litchfield has a lot more to offer. There's a first-rate golf course, where the club house serves good food. Lake Ripley Park features a beach, picnic shelter and campground. The City operates 14 more parks, including one called "Pie Shape" Park, which is dedicated to "fun for canines". It's uncertain if the dog park's name refers to the geometry or an available treat. There's also a nature center and arboretum.

The weekend after July 4, is the annual "Litchfield Watercade" with food, music and a parade. It's a four-day event that usually includes some water skiing demonstrations, dancing, fishing, and fireworks. Concerts are featured in Central Park just about every week during summer and often headline nationally known artists.

You can fly to Litchfield, bring your dog, bask in the history or just do some fun stuff.