It may seem difficult to make a connection between pheasant hunting and a trip to Arkansas to retrieve a Learjet, but for Lake Area Technical Institute (LATI) in Watertown, South Dakota, the dots are there.

Back in 2015, Eric Olson, a former student of LATI who went on to become involved in corporate aviation, was pheasant hunting in Castlewood, South Dakota with John Bucher, a corporate aircraft maintenance consultant. Together, they decided to tour Eric's alma mater. That tour ultimately resulted in an annual event at LATI called Corporate Aviation Day, which showcases employment opportunities in the corporate aviation world.

About the same time that connection was being established, another former student stopped in for a visit and announced his employer, Larry Clement of Sheehan Trucking in Sioux Falls wanted to donate his Learjet 24E to the school. The aircraft was stranded in Arkansas with a serious #2 engine failure from its last flight. The engines were old turbojets that no longer met FAA Stage 3 requirements. A retrofit to turbofans was not cost effective for the aircraft valued at $180,000.

Undaunted by these circumstances, Wiegman discussed the situation with fellow instructor Greg Klein. Both felt the gift fit perfectly as a Capstone Project, a program they put together at the school that included rebuilding aircraft.

"That was a fun project, said LATI Aviation Maintenance Instructor, Tony Wiegman. "He donated this aircraft but the problem was, it was down in Springdale, Arkansas. So, we had to figure out how to get it back to Watertown," said Wiegman.

As it turned out, another member of that original pheasant hunting party was an employee of West Star Aviation out of Grand Junction, Colorado who arranged for the dispatch of Danny Brown, West Star "Resident Learjet Expert" and all the rigging and jigs to take the aircraft apart.

"So, West Star donated all that equipment and technical expertise for ten days," said Wiegman. "We made plans and took ten students from a class of 30 to come down with me."

In preparation for the trip, Greg Klein aligned the equipment, arranged for a heavy crane to lift the plane, and obtained the over-width permits and state permits to travel. West Star's Danny Brown met the crew in Arkansas and guided them through taking the Learjet apart.

"We had to separate the wings from the fuselage of the aircraft," said Wiegman. "We took the engines off the fuselage. We took the fuel tanks apart that were on the wings because they are too long to travel down the road. Then we mounted all this on two flatbed trailers and brought her back. It was quite an adventure."

Part of the adventure was showing up to work at 7:00 in the morning, working until dark, and cooking and eating at the airport in order to complete the project on time. The adventure was made even more exciting by surviving a tornado while in Springdale.

Since Wiegman's arrival at LATI ten years ago, several Capstone Projects have been undertaken, largely, the rebuilding of aircraft, which the school then uses for its flight training program.

"We don't like to sell airplanes," said Wiegman regarding building of LATI'. "We like to fly them."

LATI's fleet includes at 727 donated by FEDEX (the engines are runnable but it's obviously not flown), the 1967 Cessna 172, a 2007 American Champion Aurora, Lear 24, a retired King Air with history in the Army and NASA, Senecca, Schweizer SGM 2-37 motorglider and Aeromot AMT-200S motorglider from the Air Force Academy, and a restored J-3 Cub, and two and a half Lake Amphibians currently in rebuild.

As a LATI graduate himself, Wiegman confesses to getting into a wee bit of trouble back in 1989 when he wrote his initials in the wet cement poured for the new aviation maintenance building.

"I told them I'll be back," said Wiegman as he left to begin his career in aviation.

Though his initials have long since been covered by the building itself, during the course of his career in aviation, Wiegman kept in touch with LATI, returning in 2008 to join the team as an instructor.

"Back when I graduated, I was kind of joking about coming back," said Wiegman, "I didn't really think it would be possible, but it worked out that way."

Instructors Wiegman and Klein have created a unique opportunity for LATI students to work on aircraft that are airworthy.

"After a student is done working on an airplane, we'll say, okay, you're going up with us," said Wiegman. "You were the last one to work on it. Let's go test fly it. We've found students take a little more time in their work and pay attention to detail under those circumstances."

Both Klein and Wiegman are also FAA authorized inspectors, pilots, as well as A&P instructors. LATI has six airworthy aircraft students work on under the instructors' supervision.

"I think the blend of being a private pilot and in maintenance just makes me better at both," said Wiegman. "If I'm talking with a customer, I can understand what he is saying maybe a little clearer than if I wasn't a pilot. When I'm flying, I understand my airplane a little bit better because of my experience in maintenance."

Whether students choose to become a pilot, A&P mechanic or both, employment opportunities abound upon graduation. 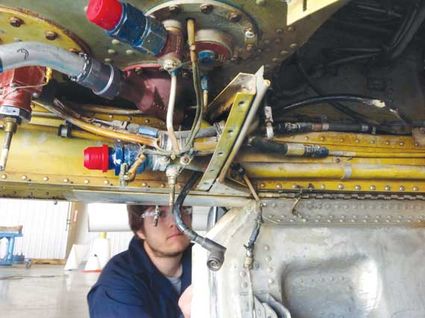 "I've been telling students for several years now, I'll guarantee them a job when they graduate," said Wiegman. "I haven't run into a problem yet. Jobs are just everywhere. From general aviation to corporate aviation, to the airlines, employers are looking for people and they're falling short. There just aren't enough pilots or mechanics out there to fulfill the need."

Starting wages, perks, and lifestyle vary according to the specific category of aviation and physical location of the airport. Extensive, world travel can be part of an adventurous student's career. For those homebodies, a career can provide the opportunity to be home every night to plant a backyard garden. Whatever the preference, LATI aviation instructors encourage students to follow their dreams.

"I tell the students when you find what you are really passionate about, it's a real joy to go to work," said Wiegman. "With Lake Area Tech, I wake up in the morning eager to go. Every year a new batch of students come in with different personalities and skill levels. It's fun working with them and seeing what we can do."