Nesting in the spring 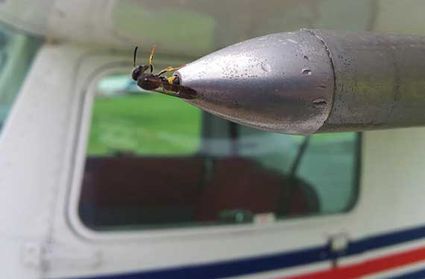 Close-up of wasp looking for a new home in this un-covered Pitot tube.

Most people are thrilled that spring is just about here. The many super cold weeks of this past December (2017) and January (2018) were, at the least, a test of our resolve to remain as residents in the area! But Minnesotan's are a hearty and determined group of people, and while the thoughts of warmer locations may hold some appeal, here is where we stay. It is a source of personal pride This is where we make our nest.

Now, as spring approaches, we can hardly wait to do almost anything that is fun, and outside. At the same time, many birds, bugs, and small animals are eagerly soaking in the warmth of the spring sun as they search out sheltered places to build nests and raise their young. They want to find protected areas out of reach of their natural predators. Sometimes those places are under the hoods of parked cars that haven't moved for a few days or inside the cowlings of aircraft parked on or near grassy areas.

Birds and bugs will frequently make nests under the eaves of hangars or buildings, or even over doorways that have an awning. Wasps (mud daubers) for instance, will make small nests in the upper corner of doorways, along a crevice on the fuselage, in pitot tubes, etc.

Hornets will often make large nests in a prolate spheroid (football) shape on a high branch of a tree. Yellow jackets on the other hand, like to make their nests underground. So, you can see insects may locate their nests in a variety of places. Open cowlings, wheel pants, open access panels, windows and doors can all be invitations for eager insects and other critters to check out for a (near future) homestead.

While birds usually nest in trees, there are those who are opportunists and will also find solitude in the engine compartment of an airplane parked on or very near the grass. Not only are they seeking sturdy shelter, they may also have a regular food source with the insects that may have recently made that cowling their home! Other birds will seek space and quickly set up a nest in a hangar on the cross beams or rafters. Barn swallows are one species that rapidly build nests in the rafters, on exposed beams and trusses, and even on top of hanging shop lights.

So once your "bird" is out of the hangar, you might want to take time to close the hangar door and widows if they are not covered with screens to help assure the birds won't make a home there, and potentially damage your plane with droppings and other unsightly matter. Also remember, an undetected birds' nest made of dried grasses, pieces of paper, and plastic that is sitting directly on top of an engine can easily catch fire and cause extensive damage to your engine and/or airframe.

Bugs, birds, and other assorted insect/animal life have been the direct cause of accidents happening with aircraft in GA, Commercial and military aviation. Insects can crawl into the pitot tube as shown in the photo in this article. Recall that the pitot-static system uses dynamic pressure and static pressure combined to operate the airspeed indicator (ASI), vertical speed indicator (VSI) and the altimeter. 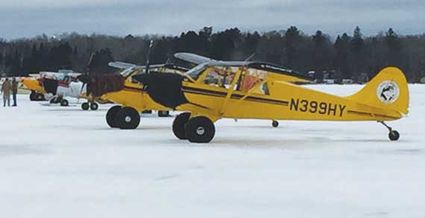 Cowl covers help keep insects and birds out of cowlings.

According to the FAA Pilots Handbook of Aeronautical Knowledge, "Errors almost always indicate blockage of the pitot tube, the static port(s), or both. Blockage may be caused by moisture (including ice), dirt, or even insects. During preflight, make sure the pitot tube cover is removed. Then, check the pitot and static port openings. A blocked pitot tube affects the accuracy of the ASI, however a blockage of the static port not only affects the ASI, but also causes errors in the altimeter and VSI."

It is a good idea to use cowl covers and pitot covers whenever you park your aircraft outside to help prevent potential damage by birds and insects to expensive engines and sensitive pitot static systems. Again, I refer you to the FAA photo in this article. And also be sure to make a checklist revision that says remove cowl cover and remove pitot cover.

Whatever the season, before you fly, always be sure to do a careful, conscientious, and complete prefight inspection of your aircraft, especially if it has been parked outside. It is simply a wise practice of the prudent pilot to do a very thorough preflight all the time. Safety should always be priority one from the moment you decide to go flying until you return to your nest.