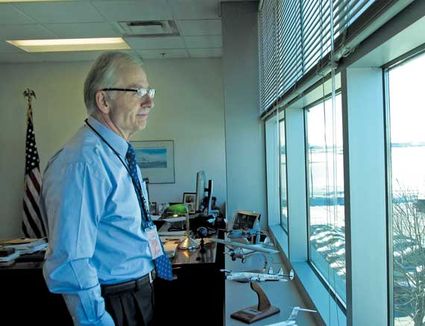 Jeffrey W. Hamiel was featured in the Feb. 2016 Minnesota Flyer as he approached retirement after 39 years with the Metropolitain Airport Commission.

As I mentioned in part eight of this series, my intention is to give the reader a knowledge of the top ten icons of Minnesota aviation through the years. No slights were intended among the state's wonderful pilots, promoters, and businessmen, but from a historian's prospective, to spotlight the headliners.

A native Minnesotan, Jeffrey Hamiel was born in St. Paul on St. Patrick's Day, March 17, 1947. At St. Paul Johnson High School, he ran track, served on the debate team, student council and was Class President during his Senior year. He then attended the University of Minnesota, Duluth, obtaining a Bachelor's Degree in Geography and Aerospace Science, while enrolled as an Air Force ROTC student.

Wearing his wings as an officer in the United States Air Force, his assignments from 1971 to 1977 included serving as Pilot, Instructor Pilot, Aircraft Commander and Operations Officer. Hamiel flew many aircraft including the 707, C-135 and the C-130, accumulating some 2600 hours of military time. Following active duty, Hamiel served in the AF Reserve for an additional 21 years, flying humanitarian missions around the world in the C-130 aircraft, leaving in retirement as a Lt. Colonel.

Joining the Metropolitan Airports Commission in 1977 as Manager of Noise Abatement/Enjvironmental Affairs, his job entailed coordination of pollution, noise abatement and other environmental programs, serving as a go-between with the public, the local aviation industry, and governmental regulatory agencies. In 1980, he moved up the ladder to become Director of Operations and Environmental Affairs for the Commission, where he maintained responsibility for the overall operational procedures and environmental issues that included the six reliever airports around the Twin Cities. Stepping again up the ladder, he became Airport Director of MSP International Airport in 1982. In this regard, his responsibilities increased to include public safety and security, lease negotiations, and facility planning.

In 1984, Hamiel became Deputy Executive Director of the MAC, which increased his overall responsibilities even further to include concessionaire contracts, wage and salary administration and other duties under Director, W.K. "Scotchy" Matheson. A year later, in 1985, Hamiel was appointed to the role of Executive Director, now with the entire airport and all its previous functions under his control. This new role included working with all State and Federal Agencies to administer rules and regulations as well as providing his input into the rulemaking itself.

During Hamiel's 39-year career with MAC, he has lived through airline bankruptcies and subsequent bailout loans, strikes, deregulation, mergers, a recession, airport improvements, building the new Humphrey Terminal, and the 2001 911 crisis. The morning of 911, Hamiel was attending an airport managers conference in Montreal. With the civil aviation fleet grounded, Hamiel jumped into a rented car and drove non-stop to Minneapolis. He subsequently had to deal with massive new security regulations and terminal check-in procedures mandated by the NTSB.

Hamiel also dealt with the Dual Track research program in 1996, during which airport commissioners considered moving the airport to an outlying community. In the end, that didn't happen, to Hamiel's relief. Plus, Hamiel survived changes of Governors and within the Metropolitan Council. In his later years as Director, he oversaw a yearly budget of 330 million dollars, with the airport screening through some 36 million passengers yearly, making MSP the 16th largest US airport. The Metropolitan Airports Commission employed some 580 employees. Under Hamiel, airport operations continued to be paid for by user fees with no Minnesota taxpayer support.

Hamiel's entire working career was with the MAC. On retirement in 2016, he mused "I can remember the day I drove in and when the day comes I drive out, I can actually say we got some things done that were good for the community and the airport." Ms. Dorothy Schaeffer, whose airport Administrative Assistant job began in 1941, and who, herself, lived through much of Hamiel's term of office, stated that "Jeff's communication skills are remarkable. He listens and constantly seeks facts and truths for his response." Schaeffer's knowledge of airport operations and facilities helped Jeff during his learning curve for which he was truly grateful. Hamiel told Charlotte Swanson of the Minnesota Flyer that his job at MAC "was in a very enjoyable environment. I did well there. So when people thank me for my service, I simply say, it was a great job for which I was paid well for doing things I loved to do." Under Jeff Hamiel, MSP International earned the reputation as one of the nations best-managed airports. 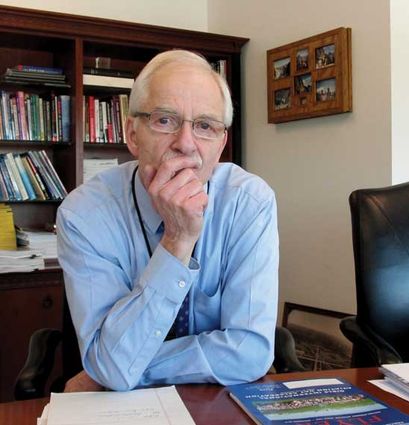 Sitting at the conference table in his office, (2016), Jeff Hamiel reflects on his carreer with the Metropolitan Airport Commission and his position as a public servant.

No biography is long enough to mention all of Hamiel's accomplishments. Needless to say, he was involved with many aspects of airports and his community. Among them were positions on the Airports Council International/North America, and Worldwide, American Association of Airport Executives, FAA NextGen Advisory Committee, AOPA, Twin Cities Communications Council, St. Cloud State University Science and Technology Advisory Board, University of St. Thomas School of Business Advisory Board, National Academy of Science, and the Board of Trusties, Hamline University. In 2017, he was awarded a Distinguished Statesman of Aviation honor by the National Aeronautics Association for his significant contributions to aeronautics.

Hamiel expects to keep flying after his 39 year career with the MAC. Married for 47 years to his wife Joan, they have raised three children. Hamiel calls Mendota Heights home and plans to spend his retirement days there into the future.

When the topic, who was the most prominent Minnesota aviation person of our times, came up at the Minnesota Aviation Hall of Fame annual meeting in 2015, Hamiel was the unanimous choice. He was inducted into the MAHOF in 2002. He is a Minnesota Giant in our aviation fraternity, having made a huge impact on airport operations here and worldwide. His career earned him the honor of being one of Minnesota's Top Ten Aviation Personalities.