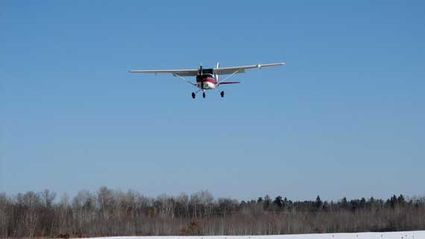 In the few hours before his official 18th birthday, Moose Lake, Minnesota resident Anakin Wilson did something he had never done before. He flew an airplane.

"I'm the Young Eagles Coordinator from EAA Chapter 237 based out of Blaine Airport," said Michael Grzincich, private pilot and professor of IT at Cambridge Community College. "Scott Nelson, Michael Miller and I came to the Moose Lake Airport today to do an away game with two aircraft.

"It's just a beautiful day, nice crisp air, minus 15 Celsius. The wind is starting to come up a little bit right now but it's smooth above 3,500 (feet) and below 2,500 (feet). It's just beautiful out there! All the lakes are frozen over with a little snow on them. There's people ice fishing and snowmobiling. You can see deer tracks. Winter flying is great!"

After walking to the aircraft on the field with Wilson's family and friends for a safety briefing, Grzincich brought everyone inside for a short presentation on the Young Eagles Program whose sole mission is to introduce children between ages 8-17 to the world of aviation by providing a free (to the rider) airplane ride with the intent to inspire them with the wonders of aviation.

Grzincich has flown over 365 Young Eagle's flights. He flew to Moose Lake Airport in his 1964 Cessna 172F, with a 145 hp engine, fixed gear, high wing, four-place aircraft, once owned by his grandfather (see feature article in the April 2017 Minnesota Flyer). Mike Miller flew a 1972 Piper Arrow with a 200 hp engine with retractable gear, one of five aircraft owned by the North Star Flyers Club based at the Anoka County Blaine Airport.

"We generally do a full load," said Grzincich, "so there will be three young people on the aircraft plus the pilot. We'll fly a 20 to 30-minute flight. Once we are clear of controlled airspace or congested areas around an airfield, if the pilot is comfortable with the young person, and if the young person is comfortable with themselves, we'll let them fly. Obviously, the pilot is always ready to assume control."

Parents and grandparents attended the event in Moose Lake to watch the group of 12 children experience their first ride in a general aviation aircraft.

"The kids have been so excited," said Verlena Jones, grandmother to most of the children and organizer of the event. "Some of the kids were nervous but generally there was a lot of excitement and anticipation. Everyone was looking forward to it. Now it's going great. All of the kids have come back very excited and animated. They are enjoying it very much."

Anakin Wilson plans to become an Airborne Ranger in the U.S. Army. He leaves for basic training in June.

"He's finding out for sure today if he likes riding in a plane or not," said Kym Garvey, mother of the Ranger-to-be. Wilson was in the first group to fly with Grzincich.

"It was a lot of fun," said Wilson. "I really enjoyed it. I was a lot less scared than I thought I was going to be. I'm glad I had Michael as a pilot. He did really good. He was kind of funny. He helped cheer me up every time it was kind of iffy, especially with the wind. It was just a fun experience. I'm even more excited about planes now."

Participants in the event were given First Ride Certificates worthy of framing.

"They also get a logbook," said Grzincich. "EAA corporate sponsors provide, through Sporty's Pilot, an online access to ground school for a year."

Grzincich said once the third unit of ground school is successfully completed, students can take their first flight lesson with a certified flight instructor, the cost of which will be reimbursed by EAA. Pointing out that a good, used aircraft costs about the same as a decent truck, the pilot¬¬ gave one last word of encouragement for general aviation. 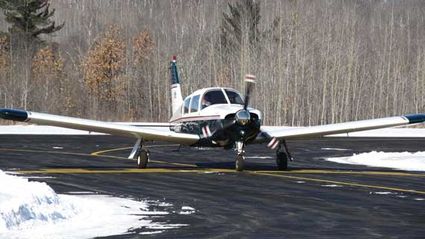 North Star Flyers Club Mike Miller flew in from Anoka in a1972 Piper Arrow, one of five aircraft owned by the club.

"What it comes down to is freedom," said Grzincich. "You can fly out to Madeline Island, land, spend the day, and be home a little after dark. It's just freedom."