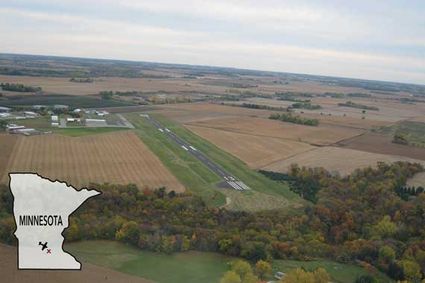 M*A*S*H was a movie and TV series about the Korean War (aka "Police Action").The setting is the 4077th Mobil Army Surgical Hospital between 1950 and 1953. In the opening scenes of both the movie and TV shows, a pair of helicopters carrying wounded soldiers are headed for the MASH. The helicopters are H-13 Sioux, or in civilian use the Bell Model 47.

The Model 47 is a historically significant aircraft. It was the first helicopter certified for civilian use, and the first used extensively by the U.S. military for medical evacuation. Depending on how you count them, close to 6,000 were built. There are still over 1,000 of them flying. And Scott's – Bell 47 Inc., FBO at the Le Sueur Airport now owns the type certificate and parts manufacturing authority. A sister company (also based in Le Sueur) provides charters and a variety of other helicopter services.

Le Sueur Municipal Airport has a lot to offer fixed wing aircraft too. The runway is 3,000 feet long, paved, and equipped with modern lighting systems. The aircraft parking area has plenty of space, and underwing camping is encouraged. One hundred Low Lead is available at the self-service fuel station. The Arrival/Departure building is open 24/7.

Situated above the town on the Minnesota River bluffs, the airport is in a gorgeous spot. In the 1930s the Works Progress Administration (WPA) was funding airports as part of it's job creation efforts. Le Sueur got some funds and a site near downtown was chosen, mostly because the City already owned the land. Leveling the ground for aircraft operations was done largely by hand, but the "flying field" was abandoned before it was used. Eventually a hospital and park were developed on the site, so the work wasn't completely wasted. The City's second attempt to build an airport was much more successful.

Land at the current airport location was purchased by the City around 1940. World War II kept things low key for a while. After the war, more land was purchased, and a runway established. The runway was paved in 1974. Le Sueur then had a modern, all-weather airport with a dozen hangars and 25 aircraft based.

Today's Le Sueur Municipal is much the same as it was in 1974. Twenty-five airplanes still call it home, but the helicopter fleet brings the total number of based aircraft to over 40. The runway was reconstructed in 2008 and the lighting systems upgraded with Precision Approach Path Indicators (PAPIs) and Runway End Identifier Lights (REILs). A courtesy car is available to get you where you need to go. The local Lions Club hosts a fly-in breakfast on the second Sunday in September.

Pierre-Charles Le Sueur not only had a great sounding name, he was an accomplished linguist and explorer. Le Sueur was fluent in many dialects of the Dakota and Ojibwa, which helped make him a success in the fur trade. In 1683 he obtained some samples of a blueish clay that a French chemist told him was copper. The possibility of finding significant deposits of the metal took Le Sueur up the Minnesota River to the confluence with another river know locally as the Blue Earth or, in Dakota, mah kato. He took a lot of Minnesota clay back to France, but it wasn't copper, just blue colored soil.

During his copper prospecting in 1700 and 1701, Le Sueur stopped at the site of the town several times. The Native Americans made arrow heads there and called it "wahinoge" or "flint quarry." Today a local firm uses quartz to manufacture natural counter surfaces for kitchens and bathrooms. The local economy also produces communications equipment. It was once famous as the "Valley of the Jolly Green Giant" (ho, ho, ho).

In 1852, a dispute over trading rights resulted in two towns less than a mile apart named "Le Sueur." It took a special act of the state legislature to settle the dispute, but in 1867 they became a single city.

Modern Le Sueur is very much a river town. One of the City's beautiful parks is on the river. There's some good water recreation including canoeing and kayaking. If you can't fit a kayak in your airplane, local outfitters offer rentals and guided trips. Golf clubs are easier to bring in your Cessna for the 18 beautiful holes just two miles from the airport. Best of all, you can get there by flying instead of paddling a canoe like Pierre-Charles.