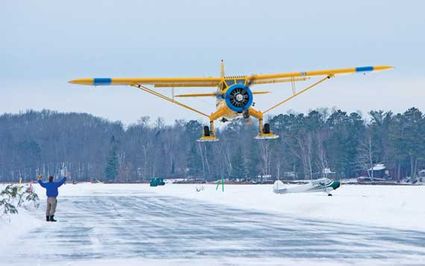 It was one of those events you shouldn't have missed. January 20 presented a perfect day for the Second Annual TrickAir Ski Plane Fly-In at Paul Jackson's Sea Plane Base in McGregor, Minnesota.

Over 50 aircraft flew in to the event, some from as far away as Kansas City, Missouri and Milwaukee, Wisconsin. The crowd was wowed by Tony Phillippi's Noorduyn Norseman flown in from Anoka County Blaine Airport.

"Tony Phillippi was nice enough to come up and show us his beautiful airplane," said event organizer Paul Jackson. "That worked out really nice. All in all, it's a good setup. We've got a lot of aviation enthusiasts today."

Steve and Kathy Schwister of TrickAir were "crazy busy" with Steve assisting aircraft on the ice and Kathy in the hangar tending to the chili feed. The couple, now in their third year of ownership are reporting growth of their business and increased interest in general aviation.

"There is such a strong interest in adventure flying," said Steve Schwister. "People who are putting big tires on their airplanes and people are going into the back country with seaplanes, those are my customers. I see growth in that. It's really exciting to see."

TrickAir's skis have a wheel penetration design for convenience in moving about on the ground.

"The thing people love about it is you can taxi right out of your hangar and go play in the snow," said Schwister. "Then, you can come back and gas up, landing at the pumps on any tarmac."

Brainerd resident Adam Siemers flew his 1951 Piper Tri Pacer 150 to the event with Jameson, his 3-year-old-son.

"We came here last year and had an awesome time," said Siemers. "This is really fun."

"Because I want him to do it," said Siemers. "I thought about selling my plane a few times, but really, I think I'll keep it forever." 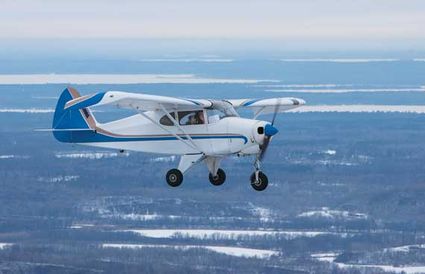 Adam Siemers flying his 1951 Piper Tri Pacer 150 to Jackson's Sea Plane Base in McGregor, Minnesota with Jameson, his 3-year-old son.

"Winter is a great time, if you're not ski plane flying, to take your airplane down for paint, interior work, avionics, upgrades, or just general maintenance," said Gesch, "so we encourage people to time their maintenance during their off-season, which is often over the winter."

During the Fly-In, folks made their way from snowbanks and lake ice to a semi-heated heated hangar on the sea plane base property where they chowed down on delicious chili, cookies and other delectables. Drawings were held for aviation related door prizes. Event host Paul Jackson also extended his thanks to Concorde Batter, Tanis Aircraft Products, Whelen, and David Clark Company for providing such valued prizes for lucky winners.

Among the guests were Randy Corfman, president of Minnesota Pilots Association, and Julie, his wife. An enthusiastic advocate of general aviation, Corfman cheerfully voiced his thoughts about the event.

"We are taking in a wonderful day of flying and friends and airplanes," said Corfman. "It's just a perfect day for it."