Minnesota's own Mark Baker inducted into Livings Legends of Aviation 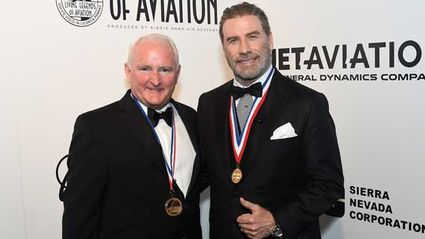 AOPA President Mark Baker with actor and pilot John Travolta at the fifteenth annual Awards for the Living Legends of Aviation on Jan. 19 in Beverly Hills, California.

AOPA President and CEO Mark Baker was among a distinguished group of aviators inducted into the Living Legends of Aviation January 19, at a ceremony in Beverly Hills, California.

Baker was recognized for his passion for aviation, his willingness to share it with others, and for his leadership in supporting general aviation causes.

Kiddie Hawk Air Academy, a nonprofit dedicated to sparking children's interests in aviation, produces the awards as its annual fundraiser.

In 2015, Baker was the recipient of the Harrison Ford Legacy in Aviation Award for his contributions to general aviation and as leader of the world's largest aviation association.