Isle Airport's annual fly-in continues to grow in attendance as interest gathers regarding activity at the airport.

It's so refreshing to hear good news. That is exactly what Dave Retka, Isle Flying Club President in Isle, Minnesota offers regarding activity at the private grass strip.

Membership in the club has grown from under 60 to 98 in the last year. Since the club is a public non-profit organization, dues are actually tax deductible.

The club joined the Recreational Aviation Foundation to gain assistance and guidance in their quest to improve the airport.

Members installed an airport sign and an observation deck on the "pilot shack" that sits between two hangars. Information about local resorts, restaurants, and activities is available in the shack. 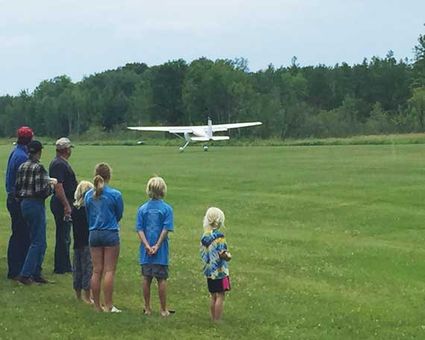 The grass strip at Isle Airport draws visitor's attention to takeoffs and landings.

A huge plus is the purchase of a larger tractor and 12 foot rotary mower for improved runway maintenance which is done by members. Another plus is the courtesy car now available for members.

Retka said one of the most important factors leading to improvements is having begun a relationship with Bollig Engineering this past summer. Bollig is assisting in mapping out plans and educating the community about the financial asset an airport provides, not only in income from hangar and airport leases, but terms of visitors to local businesses as well.

Retka and Patti, his wife purchased a cottage in the area this past summer, allowing the couple to spend time at the airport year round.

For more information about Isle Airport improvements, or to become involved, email daveretka@gmail.com.