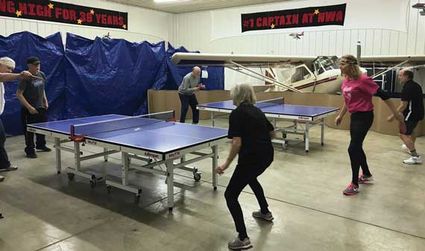 About seven years ago I met Don, a retired seed corn salesman and avid ping pong player. We hit it off right away. He asked if I had ever played ping pong or if I was interested in playing. I last played in high school where I had actually won the school championship a couple times. Don's offer sounded like a fun way to spend time indoors during a long, lonely Minnesota winter.

He was playing at the Northfield Senior Center and encouraged me to play there. The Senior Center sponsors a ping pong tournament every year at one of the schools in Northfield. They actually own eight or nine high-end tables but only have room to store the three being used regularly.

Enter Bob's Man Cave and Airplane Storage Facility at the Faribault Airport Liz Strohfus Field. Don wondered if I might have room to store three tables in my hangar, which I readily agreed to after consultation with the manager of hangar neatness and cleanliness, Linda, my lovely bride.

By late summer Don started mumbling regularly about needing another place to play besides the senior center. One day at lunch, he casually asked about heat in the hangar and whether there was enough room to set up and play singles there.

Don and I agreed early Monday afternoon would be a good time to have four or five guys over to play a few rounds of singles.

There is still plenty of room, even with my daughters' C140 and my Super D, to set up two tables and play. After a few weeks of Monday play, the word got around about this really nice place to play ping pong.

After a few more weeks, some of the guys wanted to play doubles for a few games, so we came up with the plan now in use. Singles players show up about 12:30. Play is limited to singles only until 1:30 or 1:45. We play three games with each person, then move to another table or sit out a round if there are more than 6 players. We play doubles until 3:30 or a little later.

Since this event started, I have taken about 10 of the players for an air tour around Rice County, usually with a touch and go at Stanton. The guy who started this, Don, has yet to be among the lucky riders as he has a fear of small planes. However, I have not given up yet!

As we were making plans last fall for play this winter, it was suggested what we needed most was a Hangar Pong T-shirt. The company we contacted said they could do pretty much anything we wanted in the way of a logo. I sent them a nice picture of 757 Uncle Sam. They created nice Hangar Pong T-shirts for most of the players.

Play will continue until early April, so, if you are near KFBL on a Monday afternoon, stop in at the hangar facing west as you taxi on ALPHA to runway 30. Coffee is usually on and we always have extra paddles!