A gathering of Aeroncas...

Three Chiefs and a Champ 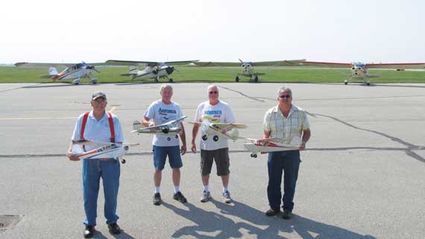 It was back in 1960 when LaVern Knoepke drove to the Pipestone Airport in southwestern Minnesota to check out a 1940 pre-war, stick controlled Aeronca Chief he heard was for sale.

"The guy who owned it was 83-years old and wasn't flying anymore," said Knoepke. "So I went out there and yeah, it hadn't been flown for a long time. It had bird droppings on the wings about two inches thick. I thought, oh gosh. This is terrible."

The airport manager confidently assured the potential buyer he could get the aircraft ready so they could, "take it out for a little spin."

"I thought, not today you won't," said Knoepke. "But we did. It had set there for years, but it started just like that."

Knoepke paid the man $650 and became the aircraft's new owner. Fast forward to a warm September day in 2017 at Fillmore County Airport where the very same pre-war Chief sat on the apron, glistening and airworthy. Adding to the sweetness of the day, a hand-crafted model of the Chief, built by Knoepke himself, was nestled in the open hangar.

A core group of family and friends were gathered to pay tribute to Knoepke's years in the air with his Chief, and the special gifts he shared with fellow fliers. With Knoepke was Betty, his wife; Steve, their son; Lowell Finseth, their son-in-law; and Felix and Janice Quast, longtime friends and flying buddies.

"We're here to dedicate this day to LaVern," said Quast. "I think people like LaVern should be known for what he accomplished all his life. Some of the best things, I think, are these models he made of our airplanes. He did a wonderful job."

Born August 15, 1928, LaVern Knoepke's life-long interest in flying was shared with his love for motorized vehicles and his commitment to resourcefulness. Though born in Minneapolis, his family moved to Preston in the early 1930s where his father worked as a farmhand. While Knoepke spent time with his father on the farm, he learned the knack of mending rather than buying new.

"I repaired things all the time," said Knoepke. "In those days, things were pretty tough. You had to make do with what you had. I remember taking Ma's old used motor off her washing machine and putting it on a bicycle. I could beat anybody on that bicycle! I had the motor mounted behind me. I'd have to reach back there for the throttle but sometimes I'd grab the spark plug. After a while I got used to the setup to where I could handle it pretty good."

It was an era when seeing an aircraft overhead was relatively rare.

"I was always interested in airplanes," said Knoepke. "They called me airplane nuts, my relatives, you know. I'd run outside when a plane would go over. In the thirties, we didn't have many airplanes go over like they do today."

As luck would have it, Bernard Pietenpol, inventor of Pietenpol homebuilt airplane kits lived about 8 miles from the Knoepke's. Pietenpol had a grass airstrip on his farm, the use of which added to air traffic in the area.

Knoepke also recalled delightful memories of going to Rochester with a friend to rent airplanes.

"That's where I really learned to fly," said Knoepke, "in the later part of the forties. I think the first plane I rode in ,was a big ol' Stinson. It was noisy. It was an old radial engine airplane. I sat behind the pilot. Boy, I'll tell you, we came between the windmill and the house just like that, zoom! Oh, gosh, yes, it was a lot of fun."

During the same era, Knoepke graduated from a homebuilt motorbike to a Harley Davidson motorcycle which turned out to be instrumental in meeting Betty, his wife in 1948.

"We had a big city park," said Betty. "All the kids congregated there. He showed up one day on that Harley Davidson and I kind of liked that. It was yellow and black. I never went with anybody after that, ever."

After serving a stint in the Army, Knoepke returned and pursued getting his pilot's license. He also dreamed of getting a commercial rating; however, fate intervened when his father rented a farm for him. Through the years, Knoepke worked at a local auto body shop, then built Harvester silos until his retirement. The couple raised two children, Steve and Lori. During those years, airplanes and motorcycles were a part of it all.

A particularly harrowing memory involves returning from a fishing trip in Baudette, flying a Cherokee 140. Though the day was beautiful, upon returning to the Minneapolis area, Knoepke, Steve, and another passenger encountered severe weather.

"We could see the clouds from Baudette," said Knoepke. "We kept going, thinking maybe they would move out of the area by the time we got there. But they didn't."

After several foiled attempts to land, only to be sucked up into the clouds by an up current, Knoepke was able to break the Cherokee loose and find his way to the runway. However, he was past the intersection when he finally touched the ground. In the distance, he could see a fence at the end of the runway.

"I just started pumping the brakes one at a time," said Knoepke. "I got right down to that fence and just let off that one brake. Then we turned around. Boy, was I happy. We landed on the runway but we used every foot of it." 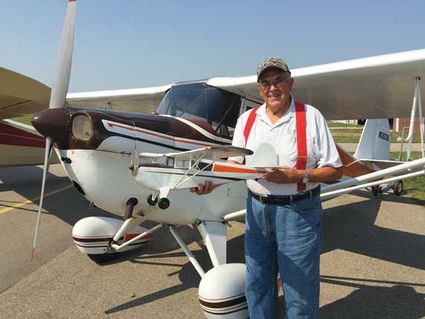 As they taxied to the hangar, they could hear sirens blowing, warning residents of the tornado east of town. The group stayed overnight. The next morning the weather cleared but the experience had made a clear impact on them. It was a challenge to take to the skies again. Knoepke said he had to will himself into the airplane, which he did.

"We went out there and I tried to make believe I wasn't scared anymore and away we went."

Now in his 89th year, Knoepke recalls many other times in the air, filled with the pleasure of checking crops, seeing autumn colors, flying with friends when the air is smooth and everything is quiet. Since medical issues now keep him from sitting in the left seat, the pilot currently concentrates on designing and building models based on family and friend's aircraft. Presenting these unique gifts, and sharing mutual adventure stories allows LaVern Knoepke to continue thoroughly enjoying aviation.