FINISHING THE FLIGHT CHECK or "The Third Time is the Charm" 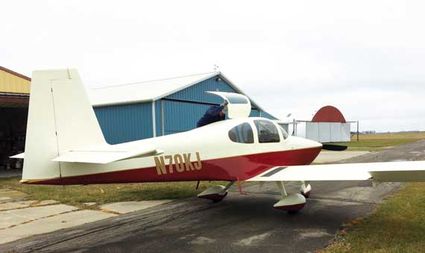 Pilots may be excused for mistaking the RV-10 for a Cirrus or Grumman Tiger. The overhead gull-wing doors give it away.

Five days later, we got a chance to finish the flight check. Kirk came to Albert Lea so we could trade time-he wanted to fly my Lake Amphibian.Since the engine was still warm, it took no time at all to fire up and get ready for takeoff-except that we had to wait about 2 1/2 minutes for the glass displays to come up to speed. This time, we had a 15 knot wind blowing right down the runway.The RV accelerated quickly in the 50 degree temperatures, and we broke ground in about 500 feet with no special attempt at a short-field technique. The airplane accelerated and climbed strongly-we were almost at pattern altitude upon reaching the end of the runway-and climbing at over 1500 feet per minute.I saw 2000 fpm later at a max effort-Van's lists the service ceiling at between 20-24,000 feet, depending on weight-and I believe it!We settled in at 3000' for cruise checks-even at this low altitude, we showed 162 knots/186 mph at 75% power (exactly as the Van's book promised)-Bonanza speeds with the gear hanging out in the breeze! Van's lists a 175 mph cruise at altitude and with lower power settings-resulting in 16-17 statute mpg-a good balance between speed and economy. We took some photos (and I took the time to enjoy the rate of roll during some steep turns!) and then headed back to the airport.

With the speed of the aircraft, I wanted to see how the aircraft performed on a short field-something that all Van's aircraft are noted for. Landing speeds were 75 on final, 70 over-the-fence, with a ground roll of 550' without heavy braking. Takeoff was400' with 2 aboard and 50 gallons of fuel, and about 900' over the obstacle-which pretty much substantiated Van's claims.

Afterward, I asked Kirk about the huge useful load in the aircraft. Kirk's RV came in exactly at the 1600# empty weight Van's claims, and Van's lists 2700# as the suggested gross weight. Since it is licensed experimental, the builder establishes the gross weight during flight checks, and some builders have taken it out to 2900#. In any case, the useful load is great! We looked over the weight and balance-the aircraft has a wide CG range.

If you want an RV-10, you'll either have to build it yourself, or find a used one. Van's lists the price of the kit at $47,730, or $61,170 for the "quick-build" kit with holes pre-punched and ready to rivet. You'll still have to find the engine and propeller of your choice, and the avionics-but by the time you are done, you will have a comfortable, fast, and easy to fly fixed gear airplane with good range, useful load, and short-field performance.

How does it stack up? 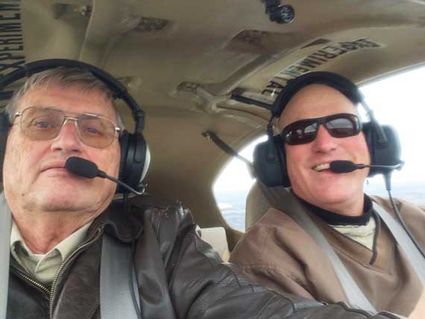 Kirk Hiner (left seat with sun glasses) and author Jim Hanson enjoy a fall day in Kirk's RV-10. Jim and Kirk take a 'selfie'. Which one is Kirk? The one that is SMILING-he's the OWNER!

People often ask how one airplane compares to another. It's hard to say, with different horsepower, wing loading, and the goals of the designer-"will people want a speedy airplane, a short-field airplane, a luxury airplane, a high-flying airplane, an economical airplane, or an airplane that can carry them a long way?" The physics of aerodynamics are fairly well known-so designers tweak the aerodynamics to favor one attribute or another. There are some airplanes that aren't the "best" at anything-yet they rank near the top in almost all categories The Cessna Skylane is a good example-it is one of the most popular airplanes ever built.

Jim Hanson is the long-time FBO at Albert Lea, MN.Now in his 56th year of flying all category and classes of airplanes, it takes a lot to impress Jim.If you have a unique airplane for him to try, contact him at his airport office at 507 373 0608, or jimhanson@deskmedia.com