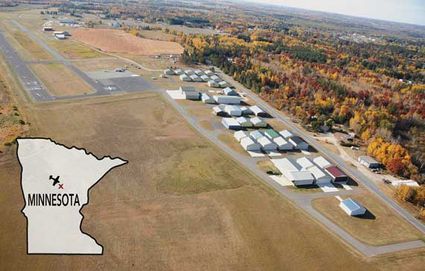 Minnesota is blessed with two great streams called Pine River. One originates in a chain of lakes in east central Minnesota, then flows north and east to join the Kettle River near Sandstone.

The other, Pine River, joins the Mississippi near Crosby after rising in central Minnesota. Both are scenic rivers. They're excellent for canoeing, kayaking and tubing. The second one is better for pilots though, because there is an airport on it. The western river also includes the White Fish Chain, arguably some of the nicest lakes in the Midwest.

If having two rivers with the same name isn't confusing enough, there's also a City named Pine River and the city owns the airport. Being outdoors is what it's all about in this town. The Paul Bunyan Trail and scenic byway traverse the area. Popular with both motorized and pedal-powered vehicles, the trail is used all year. There's lots of other places to enjoy, including a great swimming beach and some excellent parks.

The Pine River Information Center is operated by the Chamber of Commerce. Its an interesting building, constructed using Norway and Red Pine logs. Paul Bunyan's baby shoes are on display there. It's the place to learn what's going on in the area.

Originally the Pine River Airport was west of the city, but the site was coveted by a developer. In a transaction that can only be describe as byzantine, the old airport became a golf course and a private airport on the other side of town became the new city owned facility.

Operations at the new airport began in 1982 on a turf runway. The golf course is closed (there might be a cautionary tale here), but the Pine River Regional Airport has thrived. The runway was paved in 1991 and extended in 1998.

Today the Airport is just the kind of General Aviation facility a recreational area needs. The runway is 3000 feet long with visual guidance from approach slope lights (VASI) and runway end identifiers (REILS). A full parallel taxiway keeps traffic moving. That's a good thing because Pine River is a busy place and home to 60+ aircraft. GPS procedures are available when the conditions dictate their use. An automated weather station (AWOS) broadcasts real time weather. Fueling is self-service. Aircraft maintenance is available. Flight planning space, restrooms, and a phone can be found in the Arrival/Departure Building.

They like to have fun in Pine River. A Blue Grass music event happens in August and the community celebration is called Summer Fest. During the warm weather season, duck races are a big attraction. Races are held every week, usually on the same day as the local farmers market. You don't need to own a duck to enter. The contestants are decoys. You can rent one for a dollar. That also gets you a coupon worth a dollar to spend with one of the local merchants, so entering the race is free. Locals say, "Rent a duck for a buck and get a duck-buck." That describes a great deal, just don't say it too fast. 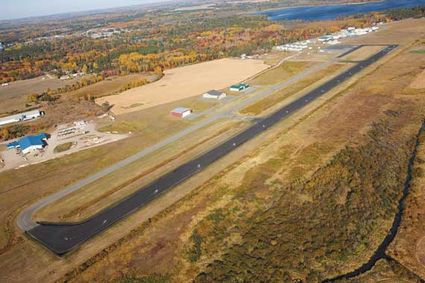 Additional view of the 3000' long runway.

One of the places in town you can spend your "duck buck" is Gardiner's Hardware. Gary Gardiner is the third-generation owner. In his spare time, he's a staunch advocate of General Aviation. Or maybe he promotes aviation and sells hardware in his spare time. Gary owns a couple airplanes, one with floats. For 15 years he's served on the Pine River Airport Commission. The quality of his support for aviation has earned him state wide recognition including an award from the "Minnesota Council of Airports."

The original residents of Pine River were Dakota, who were displaced by the Ojibwa in the early 1800s.Trade with the Northwest Fur Company brought Europeans to the area about the same time. Later lumbering became the local economic mainstay. In 1872 a village was platted. The city was incorporated in 1901.Today the economy is mostly agriculture and recreation.

The city's motto is "Progress and Promise." They've certainly made progress with their Regional Airport and they promise you a good time if you fly there.