Airplanes on display at Glenwood Airport.

Ron Renner was attending Air Venture 2016 in Oshkosh with his grandson, who thought it would be so much fun to sit in an actual airplane cockpit.

Later, back home in Glenwood, Minnesota, Ron thought how nice it would be to invite neighborhood kids to the airport and let them sit at the controls of some of the local airplanes. 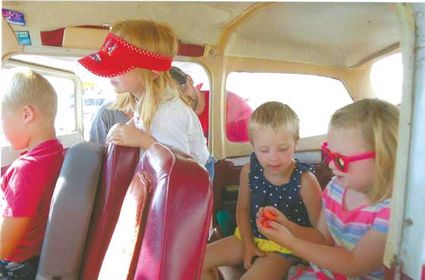 Enthusiastic young guests inspect aircraft flown into Glenwood Airport last July by volunteer pilots. The airplanes were then most willingly put on display. Youngsters climbed in, pushed buttons, asked questions, and perhaps dreamed about one day owning such a treasure themselves. Such dreams are quite easy for pilots themselves to recall.

So, the invitation went out to both Starbuck and Alexandria area pilots to bring their planes to Glenwood Airport on July 30, 2017.

This activity was the first of its kind for all of us who took part in this venture. None of us had any idea of how successful it would be. The weather was nice. About 150 people showed up in the two hours scheduled for the event!

Tanis Manufacturing, located at the Glenwood Airport, opened its facility to display products they make. Tanis also held a drawing for a Tanis Cabin Heater for pilots participating in the event.

Pilots stayed with their planes to answer questions and watch over the inquisitive young kids. They loved the buttons, knobs and head sets. Many wanted to sit in the back seat for some reason. It was fun to see the families enjoying the time together, learning more about aviation, with hands on opportunities.

Thank you, Ron, for this great experience, and for promoting our local airports. Thank you, too, Tanis Manufacturing for taking part in this venture.