Over 70 years of joyful flying! 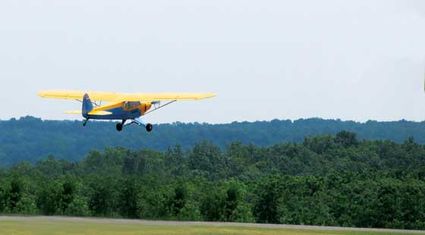 Glenn Kinneberg taking off from a Rushford Airport Fly-In the summer of 2017 in his 1947 Piper Cub, model PA-11.

Spring Grove, Minnesota resident Glenn Kinneberg will be 91 in February. If weather permits, and if he can clear his packed schedule, there is a good chance he will take his 1947 PA-11 Piper Cub out for a celebratory spin. The flight will have another anniversary factor as the PA-11 is the same aircraft in which he received his private pilot license in February 1948...on skis. Having received his Master Pilot Award over 10 years ago, Kinneberg has over 70 years of flying in his log book.

His memoirs, FLAPS UP, first published in 1988, now in its fourth printing, is based on that log book. While many pilots think about keeping a log book with expanded details of their flights, Kinneberg actually does it. The book opens with a brief history of flying in Spring Grove, naming area pilots and their aircraft. It pays tribute to Spring Grove men who obtained military flying experience, then rolls delightfully into descriptive anecdotes of aviation adventures including barnstorming, perfectly capturing the era with the statement, "In the early days, any level farm field was an airport."

Readers of the memoirs are made to feel the passion of early era aviation with stories about bracing against the cold, shoveling snow away from a hangar on a sod strip, and warming spark plugs just to "go flying for a few hours." In contrast, the author notes, "Today if it is cold and windy, we stay home, even if we have nicely plowed blacktop runways and well-sheltered planes."

For a man who was born nine decades ago in the farmhouse in which he still lives, Kinneberg exhibits a remarkable ability to adapt to each era through which he lives, due, at least in part, to his quick wit and delightful sense of humor.

During the course of his interview, when asked where he was born, Kinneberg said, "Right here...well, not in the kitchen, of course. I was born in the other room."

Back then, farming was the way of life. The landscape consisted of farm next to farm, many with their own aircraft. At that time, airplanes were practical tools used for transportation to other towns, Soil Conservation tours, aerial photos, spotting lost cattle, sightseeing, and according to Kinneberg's memoirs, "dropping the Minneapolis Sunday paper in a sack to friends."

Kinneberg became interested in flying as a child when his uncle gave him and his older brother Donald books on aviation as a Christmas gift. Growing up on the farm also enhanced the young boys' interest in flying. He and his brother took flying lessons in their teens. Both Kinnebergs soloed and became pilots in 1947.

Pilots in the Spring Grove area formed a flying club to which the Kinnebergs belonged. In 1947 the club's J-3 was traded for the PA-11 a new model Piper Cub at that time. Kinneberg notes the price was $1,525 in trade. Through the years, as flying club members dwindled, Kinneberg became the sole owner of the PA-11.

Prior to the establishment of an airport, the Kinneberg farm had an 1,800-foot strip in a hayfield on the hill, complete with a hangar.

"We built a hangar on the hill up there because the bottom here has too many wires (power lines)," said Kinneberg. "We just wished we could have an air strip down here but it wasn't safe enough so we had to build it up there."

The private strip and hangar accommodated a variety of aircraft including a Cessna 140, and a Cherokee.

According to the book, local flyers used private fields until 1968 when an airport was built eight miles east of Spring Grove at the junction of State Highways 44 and 76. Fly-In Breakfasts were established in 1969. Kinneberg expresses gratitude to the county "for being so progressive in acknowledging that a modern airport is an asset to our local communities."

Kinneberg himself is a progressive asset to his community. He became a member of the Flying Farmers in 1948. He has remained active in the organization rising from member status to president, then Minnesota Man of the Year in 1998. He is currently the Region 5 Director, attending meetings, conventions, and writing articles for the newsletter.

He operated the Kinneberg Family Farms as his mainstay while he and Sally, his wife raised Russell, their son (who also became a pilot). Sally was also an aviation aficionado and active member of the International Flying Farmers, serving as Queen in 1974.

As times changed, small farms were bought by large corporations. Sadly, Sally passed away, as did Kinneberg's brother Donald. Today's membership in the IFF has dwindled from 16,000 at its height to less than 700.

Even facing such major changes, Kinneberg remains active and involved in life with a positive attitude much to be admired. He is currently Region 5 Director of IFF, named Man of the Year in 2018. He is a driver for Pladson Ford, traveling across several states to pick up new cars for the company. He is also a driver for the South Eastern Minnesota Community Action Agency. Five years ago he attended Oshkosh as a participant in the 75th Anniversary Piper Cub celebration.

"They met at Hartford, about 50 miles south of Oshkosh the day before," said Kinneberg. "Sunday morning they flew up to Oshkosh in a line. Every ten seconds one would take off and go up to Oshkosh. There was 50 miles of yellow Cubs flying in. I was one of them."

While in Hartford, Kinneberg also picked up a prize for the oldest pilot in the group, and a prize for owning an aircraft for the longest period of time. When at Oshkosh, he was interviewed by media, resulting in articles in several magazines. The day before that event, Kinneberg was in Calgery, Alberta at a Flying Farmer Convention.

Spring Grove resident Glenn Kinneberg taxis his 1947 Piper Cub PA-11, heading towards the runway of the Rushford Airport after a Fly-In this past summer. Kinneberg has flown the aircraft for over 70 years.

"I spent one day there only because I had to get home to get ready to go to Oshkosh," said Kinneberg. "I am the region director and I had a meeting so I figured I better go."

How does the near 91-year old keep fit? Sleep well, eat well, and stay active.

As with all pilots, safety is an obvious concern to the Master Pilot.

If you don't feel safe, that's the time to quit," said Kinneberg who, last summer, successfully made his first dead-stick landing while attending the Rushford Airport Fly-In due to water in the gas.

Not only has Kinneberg written his memoirs, he recommends putting adventures to paper.

"I encourage everybody to write a book," said Kinneberg. "Write about growing up for your kids."

Not only will Glenn Kinneberg leave a book of memoirs for his decedents, he will leave the legacy of a good man with a life well lived.