Building a Pietenpol as a teenager

Minnesota Flyer reader, Jay Bosch shares an account he wrote about his experience with the Pietenpol aircraft he built as a teen and still flies after 44 years of (rightfully) proud ownership... 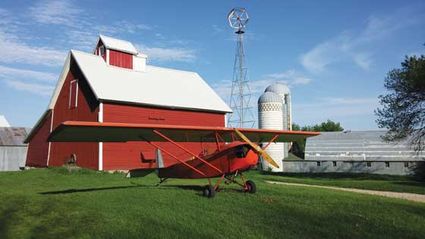 The Pietenpol proudly sits in the sun on the Bosch Century Farm, ready to take to the skies.

My Dad and I talked about flying ever since I can remember. He flew for John and Mary Jane Rice's Willmar Air Service doing flight instruction and crop spraying in overweight, underpowered Champs. I just barely remember him spraying and once landing in the field across the road.

For years Willmar Air Service held a fly-in and pancake breakfast and my Dad would give rides in John's Mooneys. At one of these fly-ins when I was 13 I saw an airplane all made from wood. It was a Pietenpol and I figured I could build one. That summer I started building lots of balsa and tissue paper airplanes for "practice". I was cranking them out and they really weren't very pretty.

I started building my plane in 1971 when I was in eighth grade as a shop class project. I started with the tail but then ran out of space in the school shop. One of the school janitors, Roger Thompson, was a pilot and volunteered space in the maintenance area of the school's boiler room. There I set up tables and built the fuselage. About the time I was done with that the fire marshal allowed as how it was not a good idea to build a wood plane near a boiler room.

Next was the wing. I had made all the ribs and had the spars cut by a fellow that worked for Bellanca near Alexandria. He had found a spruce log floating in the ocean off Oregon and brought it home. That is where my spars came from and he said it was the strongest spruce he had ever tested.

The wing was built in a week over Easter break in the school shop. A neighbor, Cliff Carincross, was a retired machinist and my Dad asked if he would help me out. The first time we met was in the school shop. In walked a somewhat round grandpa type and I wondered how this was going to work out. Cliff walked in and saw a teenager trying to build and airplane and wondered what he was getting into.

Long story short – he became like an adopted grandpa to me.

That summer Cliff and I worked many long nights, until 2 or 3 AM, in the school shop getting the plane assembled. The fuselage was mounted on the gear, the wing and tail were mounted and the rigging completed. At one point one of the school board members wandered into the shop about midnight and wanted to know what we were doing. I told him I was building an airplane and then he told me to get out of the shop. It took an appeal to the board to allow me to continue.

Side story. Ted Then, one of the mechanics at Willmar Air Service welded up my landing gear. It wasn't going too well and someone who stopped in asked what the serial number of the plane would be. Without missing a beat Ted said, "SOB-1!" As so it is. (It is also my Mom's initials.)

The plane then moved to a corner of Willmar Air Service's hangar where the covering was done. My cousin, Mark Bosch, helped me with the seeming infinite number of rib stiches. Painting was done in an adjacent hangar, the plan reassembled, and it was ready to fly.

November 11, 1974 was a beautiful fall day and my Dad, Roland Bosch, took the plane for its first flight. He was just going to take off, fly a short distance just above the runway, and land. When he pulled the throttle to idle the engine quit (I had the idle stop set too low) so the first landing was a forced landing. A screwdriver fixed the idle problem and Dad flew several touch and gos. Ed Sampson of Bellview MN, the godfather of Pietenpol builders, flew the Piet shortly after and said it was one of the best flying Pietenpols he had ever flown.

That winter, whenever the temperature was above freezing I would beg Dad to go flying. My first takeoff was from a frozen pond behind Cliff's home. We would fly the length of a lake near our farm that stretched about 15 miles to Hwy 71 south of Willmar. We would have to pull up a bit to turn and when we landed we pulled cattails from the landing gear. Definitely a lot of fun!

Cliff had arthritis in his knees really bad. It was hard for him to walk. Yet he would prop the Piet and thread his way into the front cockpit to go flying at every opportunity. When I was away a college my Dad would call Cliff up and ask what he was doing today to which Cliff would always reply, "I don't know but I think I'm going flying!" 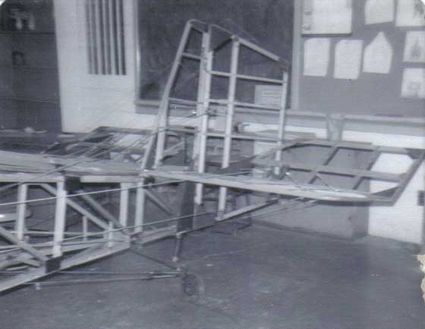 Tail with no covering. The plane was assembled in the high school shop room.

The only in-flight problem occurred when I was taking my niece, who was eight at the time, for a flight around Willmar. A little over half way around I started to notice a vibration in the engine which kept growing in intensity. I didn't want to fly over town, or over the lakes on the north side of town. I really wanted to make it back to the airport mostly because I knew my sister would skin me if she had to pick up her daughter from the middle of some field.

We made it back to the south grass runway at Willmar. The next day I took the top plate off the Franklin engine and found that the crankshaft had broken (but kept running). The plane now has a 90 HP Franklin (it had been a 65 HP Franklin) which is nice as I weigh a bit more now than I did in high school and college.

The Piet is home now in a hangar I built and there is a (hilly) runway on the farm. The plane will be 44 this year – and I still love to fly it.

End Note: Jay Bosch and his home built Pietenpol were featured in a Sherm Booen episode of The World of Aviation television series in 1975.