By Rick Braunig
Manager of Aviation Safety and Enforcement, MnDOT office of Aeronautics

If you do a search on airport security you can learn all about what you can bring with you on a Delta flight but it is hard to find information on security for airports without passenger service. With the Super Bowl coming to Minnesota there will be additional security measures at the reliever airports making them more secure and pushing any threat out to the next ring of airports.

It has been a long time since we talked about security at general aviation (GA) airports. After 911 there was discussion of the TSA implementing security measures at GA airports. Thankfully folks were smart enough to realize that there wasn't a one size fits all process for GA airports, and over time the concern about GA security has faded, but the risk remains. Recently (July 2017) the TSA released a new report on security measures for general aviation airports. This is a great report that the aviation community should heed.

The two biggest threats related to smaller GA airports are the risk of bringing in contraband to make some sort of device and the risk of launching a vehicle with a bomb inside it from a GA airport. Sure, a C172 or a SR22 isn't going to do the damage of a Boeing 747 crashing into a building, but a C172 loaded with explosives can do a lot of damage. Even if an aircraft is not part of the attack, if an airport is identified as the place where the device was brought into the country and assembled that association will give airports a black eye. The TSA report helps us to identify the things we should be looking for and the things we can do now.

The ideal small airport will have regular activity and an operator that keeps tract of the comings and goings. Everyone on the airport would know everyone else and something out of the ordinary would be quickly spotted and reported. Unfortunately, this is not the case at all Minnesota airports and activity normally decreases in the winter making some airports very lonely places. So just like in flight planning, we need to recognize the risks and look for ways to mitigate them.

Recognizing the risk is best done through formation of a plan. We have been talking with airports about emergency plans and a security plan has a lot in common with an emergency plan. The security plan identifies the risks, the steps the airport community can take to mitigate those risks and the steps to take to respond to a perceived threat.

The TSA identifies eight signs of terrorism, which I would translate to be the things that should make you take notice. For the airport community, the signs we should pay attention to involve people, aircraft and facilities. I like showing up at an airport to find a group of guys sitting around a table drinking coffee. I really like it when they engage me about who I am and what I'm doing there. It's good hospitality (most often) and it is good security. At other airports there is someone offering services that will meet me at the aircraft, but there are also some places I go that I don't see anyone during my visit which sometimes lasts a couple of hours. If it appears that no one is taking notice of the comings and goings, that is a vulnerability; a risk that needs to be managed.

The airport security plan should list the actions to be taken when something seems different. Like the emergency plan, calling 911 will work about 90% of the time. So far no one has called law enforcement to come talk with me when I'm walking an airport. I guess I don't look too scary. Still there is a risk in confronting others. The people that are helping to keep your airport safe need to have a process to keep them safe. Reporting before further investigation is a good practice. Documenting and reporting even the abnormal things that seem to be explainable is a good practice. How do you go about that and who do you report things to outside of your local community? These should all be covered in the airport security plan. 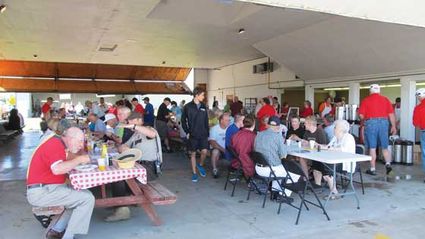 A healthy balance must be struck between inviting crowds to aviation events and maintaining the ability to recognize threats.

The TSA report provides contacts to report information to the TSA through the GA-SECURE hotline. A report can be filed by calling GA-SECURE (1-866-427-3287) 24 hours a day. The information they are looking for is the what, where, who, why and when of what you are reporting. What made it seem suspicious, what airport was this at and what aircraft (N-number) was involved. Can you describe the people involved? Why is this unusual and when did it happen? You may want to have a form in your security plan that helps people to record this data. You should also identify the right person in the community to receive this information. A local reaction is always quicker than the response from others.

We may have gotten by on our luck so far, but we have seen that the terrorists are not giving up. As security tightens around one target, they move to an easier, less protected way to reach their goal. We should make our GA airports more secure and we can do that by working together as an aviation community. Pilots, business owners and airport managers need to come together to create a security plan for the airport. Set a goal to have your plan in place by the end of January.

Make it your New Year's resolution. If you see something, say something!