Aviation's golden age might have been the 1930s, but flying back then wasn't all that reliable. Equipment failures were common and many airlines used airplanes with only one motor. Emergency landing sites were needed. The economy wasn't exactly "golden" either. It was The Depression. People needed work! The US Government started a program to build airports for emergencies, which also created jobs. Willmar was on the proposed route from Minneapolis to points westward, making it an ideal beneficiary, so the City built an airport. It was completed in September, 1934, with four turf runways. Watertown Airways initiated scheduled air service from Minneapolis to Spearfish in 1935, including a stop in Willmar. Things were off to a flying start.

Today the Willmar Municipal Airport would amaze flyers from 1935. It's very much a business-oriented facility. The main runway is 5,500 feet long with an Instrument Landing System. There's a full parallel taxiway and spacious aircraft parking area. Willmar also has the usual GPS approach procedures, and an automated weather station (AWOS) to inform pilots when those are needed. The Arrival/Departure Building is always open. It has meeting rooms, flight planning, and a pilot's lounge. Both Jet Fuel and Avgas are available 24/7. The FBO provides full service maintenance. Remembering their roots, Wilmar's second runway is 3,000 feet of turf. But the flyers from the 1930s might have trouble finding the place because this is Willmar's second airport.

Originally the airport was two miles to the east, much closer to the City. It was pretty much the same in 1945 as it had been in 1934. That's the year Mary Jane and John Rice arrived in Willmar. They would manage the airport and operate Willmar Air Service for the next 50 years. By 1958 Willmar had a paved runway, which would be extended to 5,700 by 1984. Willmar Air Service was a success, and became the place to go to buy a Mooney aircraft or get one serviced. Both Mary Jane and John have been inducted into the Minnesota Aviation Hall of Fame.

The old airport had a long runway and lots of hangar space, but was restricted for the development of instrument approaches. In 1995 the City began a study that ultimately would result in the relocation of the airport to its current site. The new Willmar Municipal opened in September 2006 and is appropriately named John L. Rice Field.

In the 1870s Willmar was a shipping center for agricultural products and a place where the railroad trains changed crews. It was named after Leon Willmar, an agent for European holders of American railroad bonds, and incorporated in 1874. The local financial institutions also have some interesting history. In 1930 "Machine Gun" Kelly and his gang robbed the Bank of Willmar, netting $70,000. In the late 1970s a group of female employees staged a strike against sexual discrimination by the bank. The famous "Willmar 8" helped pioneer equal pay for women and were the subject of a TV documentary.

Farming is still the engine of the local economy. Much of the airport's business traffic is related to agriculture, but it's rapidly diversifying. Willmar is home to 47 aircraft of which 10 have turbine power. If you don't have any business to do in the area, this is also the aviation gateway to what is arguably the most beautiful lake district in Minnesota. There's lots of good dining and some interesting places to stay. 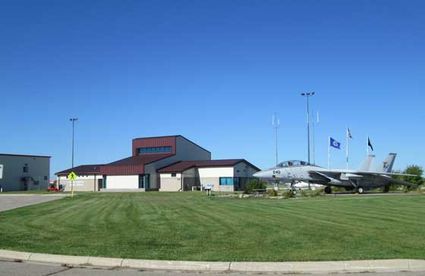 Entertainment includes some quality music venues, and the area is well known for Jazz and "Big Band" sounds. Musician and composer Bradley Joseph grew up in Willmar, so it's only natural that the local scene have some top-quality performers. His label is "Robbins Island," which is also the name of the largest park in Willmar.

The City has nine other parks, including one for canines. If "dog is your copilot," this is a place to visit. Local trail systems for horses, bikes or hiking go for many miles. There's some nice golf courses too, if you want to ruin a good walk. Rental cars are available to get around. For short stays, the airport has a courtesy vehicle and there's taxi service.

Water sports are a big attraction year around. If your Mooney doesn't have a hitch to tow your boat or fish house, no problem. Local establishments rent everything from paddle boards to pontoon boats with sleeping cabins. You can fly to Willmar and find everything you need to have some fun.