For EMERGENCY use only! 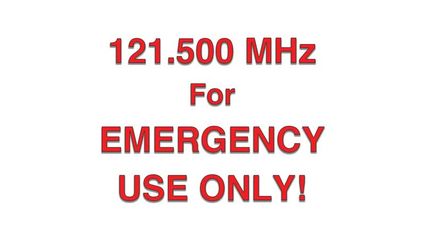 Every pilot, and likely most people who have anything to do with the flying side of aviation, know that frequency 121.500 MHz (VHF) is dedicated to emergencies and distress calls specifically. It couldn't be more clearly stated than that. But apparently enough folks have been misusing 121.500 for general conversation and other non-appropriate chatter, causing the Federal Communications Commission (FCC) to issue an FCC Enforcement Advisory (EA). It was the first FCC issued EA for 2017.

The Advisory, (DA 17-747, EA Number 2017-01)*, was issued on 08 August 2017. This came about in direct response to the Federal Aviation Administration (FAA) after they advised the FCC of impairment of their ability to properly monitor 121.500 due to an increase in improper and inappropriate use of that frequency. The advisory clearly states, "Of particular importance, Section 87.173 of the FCC's rules mandates that 121.500 MHz be used solely for emergency and distress purposes."

The Advisory goes on to state that, "The FAA continually monitors 121.500 MHz and treats any distress call received as an emergency to be investigated immediately." It also states quite clearly that, "Prohibited communications on 121.500 MHz include: false distress or emergency messages, superfluous communications, messages containing obscene, indecent, or profane words or meaning, general calls (calls not addressed to a particular station), routine messages, radio tests, and transmission of recorded audio (such as music or spoken text). Misuse of 121.500 MHz can distract FAA personnel monitoring the channel from hearing transmissions related to actual emergencies and, as a result, poses a threat to life and property."

You need to know that the FAA and the FCC take this very seriously. The Advisory points out that, "Interference to an aviation distress and safety frequency, including 121.500 MHz, is a violation of the most critical nature, with the potential to obscure genuine distress transmissions. The Enforcement Bureau intends to aggressively enforce violations of the FCC's aviation radio communications rules."

It further lays out what could befall the abuser, saying, "The Enforcement Bureau intends to aggressively enforce violations of the FCC's aviation radio communications rules. Violators may be subject to the penalties authorized by the Communications Act, including, but not limited to, substantial monetary fines (up to $19,246.00 per single violation and up to $144,344.00 for an ongoing violation), an in rem** action to seize the offending radio equipment, and criminal sanctions."

So how does one avoid a significant fine like those just mentioned? Easy! Remember to follow the rules. They were created to enhance your safety especially during emergencies. And by the way, in case you are flying out over the ocean or a significant body of water and frequency 121.5 MHz is quiet, don't make the mistake of thinking it can be used for anything other than emergency or distress calls. You should know that 121.500 MHz is also used for maritime distress, as well as search and rescue communications. In addition, it is also used for direction-finding with respect to emergency radio beacons at sea as well as on land.