"Just this to the pilots, if you see a kid hanging on the fence yearning for a ride, give him one." 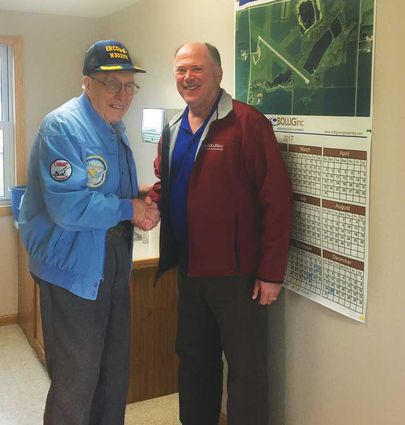 It's been said the best leaders are not those who gather huge numbers of followers, but those who empower others. Such a man is 91-year-old Homer Dobson.

"When you write this article, stress the airport, not Homer," said Dobson in an interview at Tracy Municipal Airport in southern Minnesota.

A daunting task, given the Homer Dobson Lane sign on the road leading to the airport, a framed photo on the wall of the A&D Building of Homer and Betty, his wife in an antique auto with his 1946 Ercoupe flying overhead, as well as the plaque which reads, "In grateful appreciation for your many years of dedication and diligence to the Tracy Municipal Airport."

"There was an attorney in town, William Mitchell who really spearheaded the effort to have an airport here," said Dobson. "Tracy bought the land and built a hangar and an administration building. For years, it was fairly active. Flying Farmers were active at that time. There were several airplanes on the field.

"Then, in the years into the 1950s things just tapered off. In the early 1950s, I think there was one airplane on the field and that was about it."

Three years before Tracy Airport came into existence, Iowa born Homer Dobson was married to Betty, whom he met at church. The couple moved to Carthage, South Dakota where Dobson attended a Church of Christ school to become a preacher.

"While there, I became acquainted with Claire McCann who thought every little town ought to have an airport," said Dobson. "He got that from Bill Piper. He said it again and again. As a result, many small towns had airports."

Though Charles Lindberg was Dobson's idol as a child, and he had always been intrigued by flying, he was unable to take to the skies until he was 20 years old, at which time he had also become a minister.

"One day I noticed a plane coming in to land at Carthage," said Dobson. "It was an Ercoupe. Claire McCann bought a brand new Ercoupe and a Taylorcraft, in a town of 500 people!

"Anyway, I talked to Claire. He wanted to know if I was interested in flying. I told him I was. Well, at my salary I could not afford that at all. It was just out of the picture. He also had the Allis Chalmers dealership and a car in Plymouth so he had a repair shop there at the airport. He asked if I would come out and help him in the shop in exchange for flying. He charged me five dollars an hour, that was for everything. That's how I learned to fly."

The Dobsons moved to Tracy in 1948. Though flying still attracted him, he was not in a position to pursue the activity on an individual basis. He had obtained a ministerial position, in addition to becoming the nursing home administrator.

When activity at the airport slowed, Dobson, Les Johnson, a business man in Tracy and Doug Lau, a local farmer activated their mutual interest in aviation. They began spending time at the airport, taking note of its growing neglect.

"We were trying to create more interest in the airport because there was some talk of plowing it up because it wasn't used that much," said Dobson. "A lot of individuals thought of the money angle, money that could be derived from crop land. It was our main purpose to literally save the airport."

Plans began to formulate, spearheaded by Dobson, Lau and Johnson.

"The three of us decided to do whatever we could so we put together a fly-in," said Dobson. "That was in 1955. We called it a Wing and Wheel Day. Doug Lau brought a tractor and a mower in from his farm and mowed everything around here because it was just a mess. We sent word out for flyers to fly in. We contacted various automobile dealers to see if they would bring new cars out. They did. It was a very successful day."

Interest in the airport grew from that point. Ray and Marlis Johnson moved to Tracy to build an aviation business based at the airport.

"I credit Ray with really rejuvenating the Tracy Airport," said Dobson. "He did flight instruction and later charter work, and then aerial spraying. He started with little or nothing. Through the years he developed the airport and his business. The community then realized the value of the airport because more airplanes were hangared here. Ray had quite a number of students.

During that same time period, a Civil Air Patrol Squadron was organized in Tracy.

"That involved high school kids from Tracy, Walnut Grove, and Lamberton. The squadron commander was Doctor Sampson from Lamberton. He was a pilot. That created quite a bit of interest in the airport.

"Then, as years went by and things picked up, in the late 1960s, they hard-surfaced the runway, lengthened it to what it is today, and maintained the grass strips. You can see today what a nice airport we have and what an asset it is."

Residents of Tracy appear to know the value of the airport in their community. According to the 2010 Census, the population of Tracy was 2,163. FAA records state, for the 12-month period ending September 13, 2010, the airport had 3,040 aircraft operations, an average of 58 per week.

"We had, and still do have health professionals fly-in, primarily from Sioux Falls now, but in the past they were flying in from the University of Minnesota. We had a radiologist flying in from Spencer, Iowa on a regular basis. The fixed wing air ambulance uses the airport when necessary. Most of the air ambulances fly helicopters now but sometimes they are not available so the fixed wing comes in. The DNR comes to check the goose and duck population.

"We have a very successful John Deere dealership here, Tracy Equipment. We have farmers flying in for parts. In fact, about a year or so ago a farmer flew in from North Dakota to the John Deere Dealership for a part."

Through all those years, as a private pilot, Dobson also did his part in promoting Tracy Municipal Airport, as well as general aviation, in his roles as a preacher, nursing home administrator, ambulance crew member, and mayor. Many Vacation Bible School students at his church received their first airplane ride in his 1946 Ercoupe (with permission from parents), as did nursing home residents, and interested community residents.

The pilot preacher, also well known locally for cruising the country roads in his red convertible Mercedes Benz 500 SL, has seen the impact promotion of aviation has had on the community. Many of the young people to whom Dobson and his network of aviation enthusiasts have blessed with a first airplane ride have gone on to meaningful careers in aviation. Some now work for airlines companies, others have their own aircraft just for the pure pleasure of flying.

Though Dobson no longer pilots, his interest in and support of general aviation has not diminished. He continues to support the new generation of friends of the airport who have followed in the footsteps of the founders.

"Great plans are in the making," said Dobson, "so keep your eyes fixed on the Tracy Municipal Airport."

During the annual fly-in three years ago, the community blessed the preacher with a plaque in honor of his dedication to the airport. 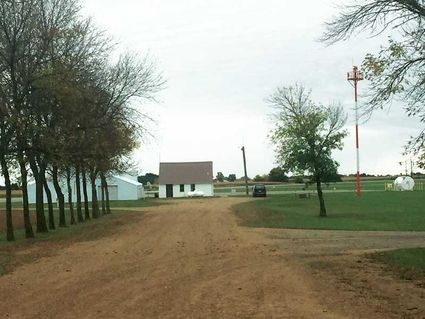 "I was making some announcements and the ambulance pulled up," said Dobson. "The crew came over with the stretcher. I told people get out of the way because I didn't know if someone had a heart attack or what."

Having served on the ambulance crew for 21 years, he was ready to help with a medical emergency. However, what really happened was the presentation of the plaque honoring Dobson which now hangs on the wall of the A&D Building at the airport.

"It was a complete surprise," said Dobson. "I was speechless. Can you imagine a preacher being speechless?"

In the case of Homer Dobson, his actions through the years have more than made up for any lack of words. Dobson is confident as care of the Tracy Municipal Airport is passing to the hands of new leadership standing on the foundation of those who have gone before them. That is what good leadership is all about.