Offices, classrooms, simulator now housed in mall across from airport 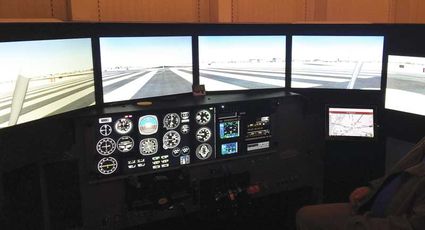 In 2015, Jim Jacobson entered into an agreement with Albert Lea Municipal Airport FBO owner, Jim Hanson to provide flight instruction from a building on the airport grounds. Both understood plans for a new terminal at the airport were underway.

Over 20 years of experience in aviation, as well as a lifetime of farming in the area had provided Jacobson with ample opportunity to learn how to calmly meet challenges as they arose. So, it was with confidence Jacobson established Accelerated Aviation Instruction (AAI) at the airport.

Since its inception, AAI has enjoyed steady growth, remodeling of the building his business occupied, hiring new flight instructors to meet demands of a growing student body, and, this past summer, purchase of a Redbird Simulator at EAA AirVenture in Oshkosh.

This fall, 15 years of conversation about tearing down the terminal building became a solid plan, complete with a date for demolition. The pressure was on AAI to find new digs. Amidst the cloud of dust created by the terminal demo, Jacobson found his silver lining a mere three blocks away from the airport in Northbridge Mall.

"We found something we really liked," said Jacobson. "I think it's working out really well. We have lots of room."

A bright, welcoming store front facing the main walkway in the mall opens to a seating area and two front offices, one belonging to CFI, CFII, MEI, and Chief Flight Instructor Jacobson, the other assigned to AAI Executive Assistant/Marketing Director, Camille Nelson. The new space wasn't particularly inviting upon the first walk through.

"Camille put a lot of elbow grease into making this space comfortable for students and instructors," said Jacobson. "She has a lot of good ideas."

In addition to AAI's front entry, two smaller offices are set up for individual instructors and their students. A larger room accommodates CFI training and conference situations. A separate room houses the Redbird Simulator which allows privacy for students during their sessions. A break area and bathroom facilities top off the generous space. For Jacobson, Nelson, and AAI flight instructor, Eric Chrzanowski, the new digs are a true blessing, despite having to dismantle the simulator they had just installed at the airport.

"It was a day to tear the sim down and a day to put it back up again at the mall," said Jacobson. "That's just the way it is. To make things better, you have to sacrifice for a little bit, but I don't really think we're sacrificing now. I think we have a really nice place."

The simulator is a definite advantage for students, both as a learning tool and a financial break.

"The cockpit is the poorest classroom there is because I can never get your full attention because you're always flying the airplane," said Jacobson. "In the sim, something goes wrong or you don't understand something, we pause it, look at the screen, and talk about what went wrong."

Having the simulator also takes out any human element of potential doubt.

"Sometimes, what students think they are doing and what they are actually doing are two different things," said Jacobson. "With the sim, it's all graphed out. It shows them what they did."

Jacobson said seeking a rating in an accelerated fashion has other positive aspects like less re-learning of material since lessons are compact rather than spread out over an extended time. Also, there is less stress in planning because at AAI, each student is assigned one airplane and one instructor.

"We work with students all day, every day until they are done," said Jacobson. "When our students come in, nobody else has that airplane. When they want to go fly, they can go fly. We have one instructor for one student for whatever time their rating takes. It is real intense."

That being said, the owner noted no teaching is simply glossed over simply to get through in record time.

"I am not here just to ram people through," said Jacobson. "It's just that we are not wasting any time. My real goal is to make safe, proficient pilots. I think you can strongly encourage safety by teaching students not to take goofy chances."

Having taught over extended time periods and in the compressed time frame, Jacobson prefers the accelerated method. However, he said the choice is up to the student.

"If you've never done accelerated training, it's a shock," said Jacobson. "I had instructed for two years at a collegiate program where, if I got an instrument student done in a semester, I was doing pretty good. Then I got here and it's like, okay, here's your instrument student, you've got 10 days to get them done. It's like, holy cow!"

FBO manager Jim Hanson notes that, if a person's goal is working for the airlines, they best be aware pilots need to be able to absorb information rapidly.

"They need to learn quickly, and they need standardizing procedures," said Hanson. "That is something you get at Accelerated Aviation Instruction because that is the way they teach their students." Speaking of instructors, AAI is hiring.

"We're staying really busy," said Jacobson. "We hired an instructor and we're looking for more. Flight instructors are hard to find right now. We're a little more particular in that regard because we do the accelerated training. You have to have someone who has a little gumption to get people done."

Having observed the workings of AAI for several years, the FBO manager gives his full support.

"It's not about how well you can fly," said Hanson. "It's about how well you teach. In this case, Accelerated Aviation Instruction has done it so often, frankly, they have it dialed in. They know exactly what needs to be taught."