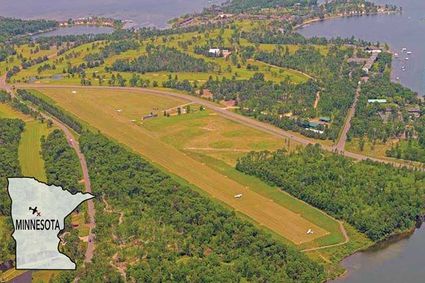 East Gull Lake is a modest size town in central Minnesota. It was incorporated in 1947, but the community was there long before it became an actual city. About 2,000 people are full time residents. East Gull Lake is known throughout the upper Midwest for its resorts. In fact, the whole concept of a resort might well have been invented there. Just for the record, the City gets its name from being on the east side of Gull Lake. There is no West Gull Lake.

Cragun's and Madden's are the two largest resorts, they are friendly competitors. These aren't "mom and pop" places. They have pools, spas, golf and some of the best dining anywhere. Though all the area resorts are top quality, Madden's is the one with the aviation connection.

In 1909, some developers built a golf course and a hotel on East Gull Lake. Things went well until 1929. The beginning of the depression left the developers in dire straits. They leased the golf course to Jack Madden and his uncle Tom for $500, although, even at that rate, Madden's couldn't generate enough revenue to pay the lease. Eventually they made a deal to buy the course with no money down. The resort started with three housekeeping cabins. Jack's brother Jim joined the business. By the early 1930's, a fairly level part of the property was being used as an informal airport.

In 1938, Minnesota Governor Floyd B. Olson was visiting East Gull Lake and became rather ill. The situation was serious so the flat area adjacent to the county road was used as an emergency airfield. A large, three-engine plane landed and took Governor Olson to Rochester for treatment. The airport later became a formal, licensed facility. It was dedicated by another Minnesota Governor, Elmer Anderson. The dedication took place on July 7, 1961. Earlier that year the Crow Wing Flying Club sponsored a breakfast at the airport that attracted over 100 airplanes.

The unlighted turf runway is 2,600 feet long. Tie-downs are available for parking. Most of the local resorts offer free pick-up at the airport, however, if you're just there for a $100 hamburger, there is plenty of eating within walking distance.

Just because it hasn't changed, doesn't mean the airport isn't popular. Since 2010, East Gull Lake has hosted the Minnesota Seaplane Pilots Association (MSPA) Spring Safety Seminar. Gull Lake has a licensed seaplane operating area. The event frequently draws 70 plus aircraft on both wheels and floats. AOPA president Mark Baker was the feature speaker in 2017. Presentations and discussions are held at Madden's Conference Center. The resort also hosted the Minnesota Council of Airports (MCOA) conference in 2016.

For many years the aviation connection has been Brian Thuringer. Brian's been a pilot for over 30 years. He is married to Deb Madden, Jim's daughter. They own the resort together, but have passed the active management to their children, including another experienced pilot, Ben Thuringer. Brian's other contributions to Minnesota Aviation include serving as a member and chairman of the Brainerd-Crow Wing County Airport Commission.

In keeping with the seaplane theme, South St. Paul based "Wings over Water" offers a package deal with Madden's. Pilots seeking their single-engine seaplane rating can vacation at the resort and learn float flying on the lake. Two well know seaplane instructors, Mary Alverson and Brian Addis, do the teaching.

The golf course idea from 1909 really took hold. If you like to fly-in and play golf, this is paradise. There's now over 100 golf holes in East Gull Lake. A driving range is right next to the tie down area so you can hit a bucket of balls while you wait for your ride.