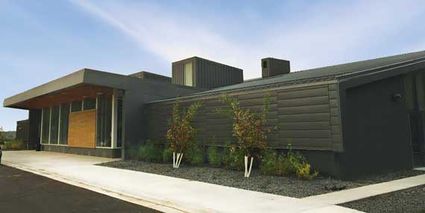 The airport serves as one of four international ports of entry into the United States and approximately 15,000 passengers arrive and depart from the airport daily. The airport is also one of nine in Minnesota that offers commercial airline service. The new 18,000-square-foot terminal opened on October 4 and the community celebrated with an official ribbon cutting hosted by International Falls Mayor Bob Anderson on October 10, 2017 at 1 p.m. Minnesota Lieutenant Governor Tina Smith along with state legislators, Airport Commission Members, Koochiching County officials and City of International Falls Council Members were expected to attend the event.

"Travelers arriving and departing from the new Falls International Airport will have a much different experience, a much more pleasant experience," says SEH Project Manager Bob Cohrs. "Boarding the planes without having to weather cold, wind or heat will create a better experience as will the upgraded areas to pass through screening and wait for airplanes to arrive or depart. We've been working with the City of International Falls and Koochiching County for more than 25 years and made several much-needed improvements throughout the years. The new terminal is one of the highlights."

SEH is leading the project, providing overall project management, structural, environmental and civil engineering and landscape architecture as well as assistance in obtaining federal, state and bond funds totaling $9.1 million. SEH is partnering with the following companies to complete the project: